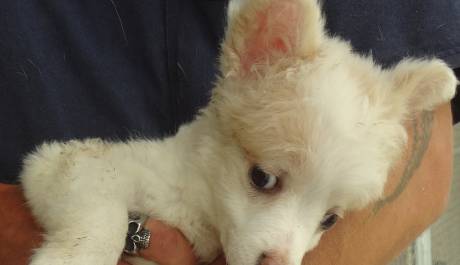 Help us, Help Her.

WAYCROSS, GA.....Late last Thursday I received a desperate plea to help a puppy that had a severe disability and could not walk.    The person was fostering the puppy, and the puppy was scheduled to be put to sleep at 3:30 the next day because of a disability.   I gathered as much information I could to find out where the puppy came from and what had been done to resolve the problem.   Sweet Lamb Chop we believe is a six week old West Highland Terrier Mix.    A woman brought her into the Okefenokee Humane Society claiming she found her on the side of the road.   This same woman I found out several weeks earlier had dropped off a puppy she claimed she had also found on the side of the road.   This time the puppy had Parvo.   The problem with the story she told about Lamb Chop is that this sweet puppy cannot walk.  She can move her legs and roll over, but she cannot stand up or even hold her head up.   She is also so small that if she had been left on the side of the road in a remote area, she would not have survived the night.  Unfortunately, some animal would have gotten to her.   She was brought in covered in fleas but did not appear to have the appearance of a dog that was left on the side of the road.   I believe this is a breeder that dropped her off.

The Humane Society was going to put Lamb Chop down because none of the doctors that saw her knew what was wrong.   The way she was brought in was no life for a puppy.   After lots of e-mails, I  knew I had to save this puppy.  She was full of energy and Life and even if she never walked, she deserved to live.   I was already designing a quad cart in my mind where she would be able to walk with those spinning legs of hers.

Friday morning, we went to pick her up and brought her to our Neurologist in Charleston. We arrived late Friday night and Saturday morning, I had our Neurologist do a full work-up.  We did an MRI and a Spinal Tap.    The MRI showed that our sweet little Lamb Chop had a severe case of Hydrocephalus.  Hydrocephalus is an expansion or abnormal dilation of the ventricular system due to an increased volume of spinal fluid.   It can cause a lot of neurological abnormalities in dogs.   After consulting with Dr. King, we came up with a plan we believe is going to give Lamb Chop back her ability to walk again.  Just from removing the small amount of spinal fluid during the Spinal Tap, her movements have improved.   Lamb Chop has to have a shunt put in that can be manually controlled with a magnet. This device will give the surgeon a way to control how much fluid drains each time.   Draining too much can give an animal a massive headache and can cause other negative side-effects.    We are in the process of finding a device that will work for this tiny little pup.   We hope to be doing surgery by the end of the week.  In the meantime, she is in Critical Care being taken care of.   Everyone loves our little Lamb Chop.

The surgery we are talking about has lots of risks.  Surgery is the ONLY chance she will have ever to walk again.   We pick the best Surgeon to do the job and then we PRAY a lot.   Lamb Chop is the happiest puppy you will ever meet.   She is normal and healthy in every other way.   Hydrocephalus is usually a genetic disorder.    If a BREEDER is dropping these dogs off, she must be stopped.   If you know of any Breeders (Back-Yard or Credited) that had puppies in the last six weeks that look anything like Lamb-Chop, please let the Okefenokee Humane Society know.   We have asked for the person's name but have not been given that information.   Please, do what you can to put an end to other puppies suffering the way our sweet girl has and get them to follow up on the person that dropped her off.

Say a lot of Prayers for Lamb Chop and her Surgeons.