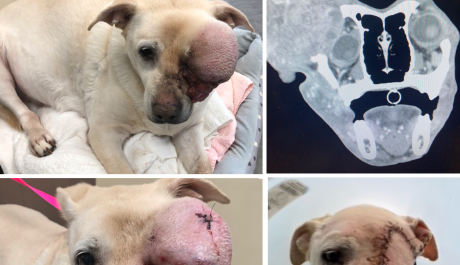 BEAUFORT, SC...I was sent a heart-breaking picture from Beaufort County Animal Services almost two months ago of a dog with a massive tumor on her head.  She was a six-year-old yellow lab.  I offered to help if the Owner was not found.   With Covid-19 this last year, we never know the entire story of how these innocent Souls end up in harm's way.   Blondie had a microchip registered that BCAS was contacting to get Blondie back to her rightful Owner.

As it turns out, the Family moved out of state and did not take this precious pup with them. During the interim time waiting for the Owner to reclaim Blondie, more information came about the Owner and the dog we now had.   Blondie was boarded in Hilton Head a couple of years ago, and at the time, it was noted she had a small growth on her lid.

The Owner thought something happened at the Boarding facility and demanded a Vet see her.  Blondie was seen, and the Vet recommended the growth be removed and biopsied.  Sadly, the Owner did not have the tiny growth removed, and it is now the size of a large grapefruit.

All that could be done to find the Family was done, and now Blondie was finally able to be seen by our ER / Surgical Team at CVRC in Charleston, SC.   The massive growth had taken over Blondie's left eye, and she no longer had the use of that eye.   The size of the growth also prevented her from seeing past the growth without moving her entire body.  A biopsy was taken to determine if it was cancerous, and then a Cat Scan had to be done.

During all of this, I decided the massive tumor had to be removed to begin the healing process for Blondie.  The tumor had abscessed and was infected.   I did not need to know if this precious dog had cancer before I proceeded.  She was at risk of losing her Life from the infection, and the pain from this mass was something she had endured far too long.

Several surgeons got together to see the best course of action to remove the mass and save the eye.   The Cat Scan gave them a lot of information about how much bone was involved and exactly where the eye was.  X-rays were done of her head and the rest of her body to see if cancer had spread. The Radiologist saw a 3 mm pulmonary nodule on her chest x-rays, a granuloma, and not cancer.

Dr. Chris Gauthier was the surgeon on call for her procedure.  In addition to the mass removal, Blondie's left zygomatic arch and left eye were also removed.  A large flap had to be made from the skin on the neck and surrounding area.  Drains were placed under the skin to allow excess fluid to drain.  Blondie did well during the lengthy procedure and was stable throughout.

Blondie was fine during the procedure but had massive amounts of swelling and regurgitation post-op.   She had to stay in the hospital in ICU for the next week to control her swelling and the pain associated with her procedure.  The problem with pain meds is their own set of complications, such as nausea and regurgitation.  Our sweet girl had both of these.

We never bring dogs back to our Rehab Facility until all tubes have been removed.   Blondie was a long way from having her tubes removed, so she had to remain in ICU.  After about a week in critical care, our girl began to feel better.  Her face was still swollen, but only half the size it was, and the drain was no longer producing.   It was a very rough week for our girl, but the worst appears to be behind her.

Blondie is at our Rehab Facility healing from her surgery.  We now have to raise funds for her Surgery and Hospital stay in ICU.  She is a fabulous dog that appears to have been on her own for a while.  Her biopsy came back that she had cancer, but we got clean margins, and cancer had not spread.   She had lost her vision quite a while ago and now can at least see where the massive growth had been blocking her vision.

We have an enormous bill with this beautiful dog.  Please, DONATE to help more pups like Blondie get the medical care they need to Survive and Thrive.  Your support is greatly appreciated. 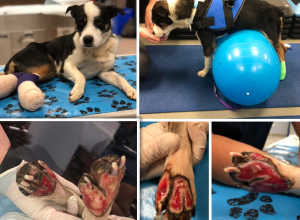 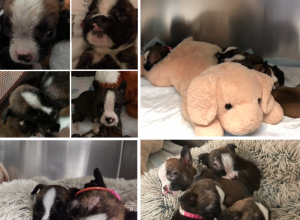