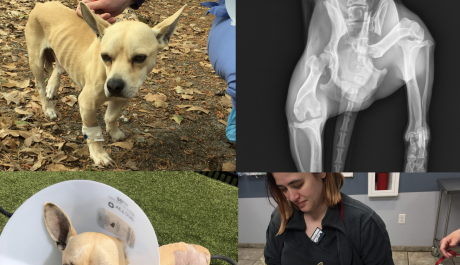 GREENVILLE, SC......Adorable Chevy was picked up as a stray after what appeared to have been a hit by car.  He refused to put his rear leg down and an x-ray was done by Greenville County Animal Control.   He had multiple displaced left-sided pelvic fractures.   Chevy had to see an Orthopedic Surgeon or GCAC was not going to hold him since he was in terrible pain and did not want anyone near him.

We stepped up to get him out and give him a chance.   Hit by Cars happen several times a day.  No one wants to step up for their sweet pup once this happens because the cost to fix them is prohibitive.  Most are put down because of lack of funds.    Chevy's case was a little bit different.  He was an Emaciated dog that was hit by a car or so we think.   His Life was going in the wrong direction, way before this happened.

Sweet Chevy was brought to Charleston Veterinary Referral Center in Charleston, SC.   The first thing they noticed was that he refused to use his rear leg.  The injury appeared to be an old wound and the leg had atrophied.   The bones had begun to calcify in their broken position and the leg was basically useless.   The good news is Chevy had become a tripod all on his own and had become adept at getting around beautifully without his rear left leg.

After much consideration, it was determined Chevy no longer needed his mangled leg.   To re-break his pelvis to put a plate in would be inhumane and the chances of it working were not favorable.  Amputation was the most humane thing to do.   We first had to fatten this sweet pup up before we proceeded and get his pain under control.  Chevy gained several pounds over the weekend and all of his bloodwork came back stable.

Dr. Jennifer Au did Chevy's amputation.  His surgery was a little more complicated because of the breaks.  It wasn't a simple amputation and required a lot more time.   We had all agreed that when Dr. Au had Chevy sedated if she felt she could do a repair that would improve his quality of Life, she would scratch the amputation and do the repair.  Chevy's leg would not bend at all, even while sedated.  We each felt good about the amputation after this discovery.

Chevy came out of the procedure fine and took a little longer to recover since he developed a low-grade fever.  The fever we believe was more from the initial trauma that had been going on for so long.  His body had adapted to having the leg the way it was and it was an adjustment to having it gone.  His fever resolved in a couple of days and he was a happy pup no longer in pain.

We get contacted daily about Hit by Cars.  I wish we could take them all or better yet, I wish the original Owners would step up and help us with their dogs.  None of that happens and these adorable pups are euthanized daily.  Accidents happen all the time.  It is not the accident that matters but what you do as a Human Being once your beloved Pet is injured.  What you do or don't do will be with you long after your Pet has been Euthanized.   Do right by Man's Best Friend.  If the injury is fixable, reach out to everyone you know until a solution is found.  Don't give up on them.

Adorable Chevy is on the mend.   He runs like the wind and acts like he never had a care in the World.   All that is left is for us to pay his Surgical / ER bill so we can move on and save more pups just like Chevy that are waiting for someone to say YES, I choose you.