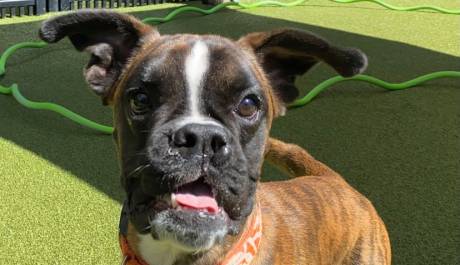 We went from four one-pound boxer puppies with Cleft Palates to one forty-pound Cleft Palate puppy that just turned one year old. I would say it was a Miracle to save the one, but that is not true. It was a year of hard work, long hours, thousands of dollars, and a determination never to give up when complications happened.

I gave up posting for Chip when he had so many months he had to survive before he could have his initial surgery to repair his palate. The odds of him surviving before his surgery were about 80 to 1; he would not make it.  Every day was a new challenge to overcome. The biggest was him aspirating and dying. Next was getting enough calories down him to develop normally without complications. Chip had already fractured his leg because his bones were fragile. He had to heal from that and get stronger.

Every week I got news of other Cleft Palate babies not surviving. Once in a Blue Moon, we would hear of puppies surviving till their surgery, only to die from surgical complications. When Chip got cleared for his first surgical procedure, we knew this would be the end. He did well during his first procedure, but now, the challenge was to keep weight on him with the feeding tube they had inserted. Chip could not have any food or liquids by mouth for several months.

Within a month, part of the procedure began to come apart. No more surgery could be done until the palate had fully healed. My Adoption Coordinator, Jeri, and I were beside ourselves with worry. In our hearts, we knew this was the beginning of the end. I kept coming up with new formulas Chip could tolerate, and Jeri fed them to our sweet boy.

Chip was losing so much weight I decided the tube had to be pulled, and we had to go back to feeding him the gelatin formula we had used in the beginning. That system worked, and our sweet boy began to regain the weight he had lost. Several more months went by feeding Chip this way, and Dr. Sura finally agreed to go back and repair the areas that had come apart. She also removed his large front tooth, causing his lip to split apart.

The second surgery was 90% successful. Chip has a small opening going to the back of the throat that will eventually heal on its own. He was back on the feeding tube for another month and then had the gelatin formula. I am happy to report this precious pup can now eat small kibble and thrive.   His weight this morning was 39.15 lbs.

When I look back at all the struggles along the way, I am shocked we were able to save one of these beautiful angels. Each puppy that passed took a piece of our hearts with them and confidence that what we were doing would work. The only thing we had going for us was a determination not to give up, and a love bigger than we realized was possible.

The only thing Chip has left to do is live a long life surrounded by people that love and adore him and finally get to be a Puppy.   He is so used to us feeding him by hand that eating and drinking out of a bowl is foreign. The good news is that he has the rest of his life to figure it out.

We now have to raise funds to pay for his surgeries and ER visits. Please, Donate whatever you can so we do not have to carry this financial burden. Thanks for helping us with Chip and all the other abused pups in our care. You Love, and Support is greatly appreciated.

On another note, we found a fantastic home for Frank close to the Canadian border outside of Rochester, NY. He is living the good life in a much cooler climate and has already experienced snow. Life is Good for our special boy.