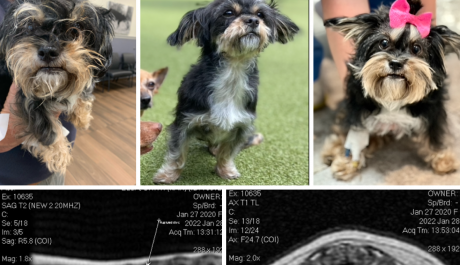 Help Us, Help Her, by DONATING!

BEAUFORT, SC....Elsa is a 2-year-old Yorkie Mix that was brought to Beaufort County Animal Care Services to be put to sleep.  Elsa had suddenly developed rear limb paralysis.  I asked many questions to determine if the dog had been hurt by accident but did not get much information.  The Owners did not want to pursue medical care and wanted her put to sleep.  I had them sign Elsa over to BCACS so we could help this special pup.  We also asked the owners for her shot records, and they did not have any.  The scruffy photo is how Elsa looked when she arrived.  She was matted and was a mess.

I knew it was a long shot to get Elsa walking again, but I wanted to do everything possible since she was a puppy.   We had her taken to CVRC in Charleston, SC, where she was admitted through the ER.  Elsa had a small amount of deep pain in her rear legs but needed to have her bladder and bowels expressed.   It took the ER Team several days to assess how she responded to pain once her bladder issue was addressed.  Elsa had very little pain in her rear legs and still had rear-limb paralysis.

The only way to determine how much damage had been done to her spine was by an MRI.  Her MRI showed she had several areas of deterioration.  Her owner said the injuries had just happened, but the MRI showed places that had been deteriorating for a while.   The MRI showed dehydrated discs at T11-L1 with evidence of IVDD and moderate compression at T12-T13 on the right.

Dr. Steve Garnett had been over-seeing Elsa's care and went into great detail explaining that doing surgery might not give Elsa her ability to use her rear legs.   Elsa's only option was surgery to restore her ability to walk, but her chances were not good.  He also explained that it would be a very costly process since, after surgery, she would need months of expensive Rehab.   If I was unwilling to take on the Physical Therapy expense, I should not proceed with surgery.

We will never know what happened to Elsa; it did not matter.  All I knew was that her only chance (although small) was to proceed with surgery and Rehab.   I opted to do everything possible for dear Elsa, so her Journey to heal and learn to walk again began.

Elsa did remarkably well during her spinal surgery.  She had to remain in the hospital for over a week until her swelling began to resolve.  One of our special Vets at CVRC offered to bring her home each night and back to the hospital while she was doing Rehab.  This way, Elsa got to be in a home environment during the next six months of Rehab and was given all the care she needed to provide her with the best chance of walking.

Elsa was handled with kid gloves for the next six months and had three complete rounds of Rehab at CVRC.  After four months, we brought Elsa to our Rehab facility to continue her Rehab.  She was starting to walk without falling over.  She had learned to correct her stance to give herself more stability to continue moving forward.  She can even run and chase after a ball on carpet or canine grass.   The more she runs and plays, the stronger her legs will get, which will protect her spine.

Elsa will always be a special needs pup, given her history of spinal injury.  She is doing something the surgeons and physical therapists did not think was possible.....walking on her own.   Elsa's bills are over $10,000 to give her back her ability to walk.   First was her costly surgery, and then came her Rehab, which was just as expensive but needed.   We could not be happier with the outcome.

We know that a lot of people do not think an animal's Life is worth the cost of saving them.  All we do is save abused, neglected dogs that everyone else has given up.  There is no guarantee we can save them, but they are guaranteed Death if we do not try.  We save over 95% of the abused dogs we take on.  No matter the cost, we never give up on a dog fighting to survive.  We cannot do this without your love and support.

Please, Donate as much or as little as you can to cover Elsa's bills so we can continue saving abused, neglected dogs.  Noah's Arks Rescue has 34 dogs in our care at our Rehab Facility.   Some can be adopted, and others are in our Hospice Program.  Animals that should have died years ago are still with us, loving their lives.  We are their Home and Family.

Covid has taken away more funding from Not for Profits because people don't want to work, so they cannot donate.  Finding reliable employees that want to work has become almost impossible.  Instead, my Staff is working extra hours to stay on top of each dog's mental, physical, and medical needs.  Quality of Life is the first thing we think of when we think about our pups.

Covid has also put a financial strain on good-hearted people that do everything they can to donate.   Seeing the daily abuse and neglect is not something depressed people need to see, so I only do a few monthly e-mails.  We are still saving abused dogs and doing everything possible to give them a better life.   We are constantly financially broke, but our hearts are always full of love for those that have been forgotten or replaced with younger pups.

Elsa's outcome is worth celebrating.   Six months ago, she would have been nothing more than a pup that was euthanized because of an injury, along with thousands of other dogs.  Today she is ready to be adopted and has the rest of her Life to enjoy a lifetime of unconditional love and happiness.

On another good note, Mae Pearl, Hank, Pluto, Minnie, Frank, Otis Redding, Chip, Poppy, and Mac have been adopted into amazing Families.  It is hard to believe we have adopted so many pups and still have 34 dogs in our care waiting for their new Family.

Please, Donate whatever you can and if you are looking for a new Family member, let us help you find the best possible match.

Warm hugs and much love....Jennifer