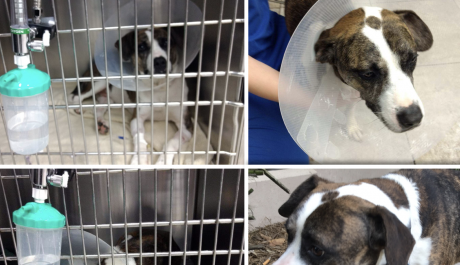 Your donation will help KIMBER recover.

BEAUFORT, SC....We have people calling almost daily to see if they can surrender their dog to us.   The answer is always the same.   We do significant medical abuse and neglect cases only.  Please, contact Animal Control or the Humane Society in your town to see if they can help you re-home your sweet pup.  If they need more information, we do our best to put them in touch with the proper people so they can get the help they need.

Saturday a young lady walked into Fetch Mkt. to see if she could surrender her Pitbull.  I started to tell her what we tell everyone all the while taking a long hard look at this young lady.   Life had been very hard for her.  She looked like she was 15 years older than she was.  I stopped talking and went around the counter to ask her if SHE needed some help.  She explained that her Husband had recently passed away and she had to leave the place where they lived.   She was renting a place and was going to be kicked out of there because they do not allow Pitbulls.

She explained she had been to Beaufort, Hilton Head Humane and JARM and no one would accept her dog.  I decided to go outside and spend some time with her to access the situation and meet her dog.  I immediately realized she and her dog had been living in her car.  I went to meet her Pitty Mix and was shocked how despondent her dog was.  His head was hanging between his shoulder blades and would not even raise it.  She said he had not eaten for three days and had blood in his urine.

How could anyone with a heart send this person away without offering assistance?  All she wanted was help for her dog.  She said she could not care for herself much less her dog.   This young lady was doing everything in her power to be responsible.  She was not abandoning her dog as we see daily.  If her dog could not stay in her rental, then she would sleep in her car with her dog.

I asked her if she could drive Kimber to our Vet and she said yes.  She wanted to make sure I would take responsibility for her dog since she could not and wanted to sign him over.  I allowed her to do that since she needed to take care of herself.   Before she left, I wrapped my arms around her and said she did not have to worry about Kimber.    She didn't know it, but Kimber had just won the Lottery.   Hugging her was like hugging a fragile, delicate bird that had lost her wings.

I don't know her tragic story.  I don't think the story matters.  What matters is how many people chose to turn her away.   Everyone needs a helping hand at times.  There is no shame in reaching out for help.   Shame on the people that decided not to see a Wounded Soul that cared more for her dog than herself.

Sweet Kimber was taken to our Vet and diagnostics were done.   He was having heart issues from having worms in his heart and was in Renal Failure.   He was also anemic from the burden of the worm population.   Kimber is six years old and has not been the same since his Master passed away.

We had to have Kimber taken to CVRC in Charleston since he was unstable.  He has a team of Specialists over-seeing his care to determine what to do first to get him better.   Dr. Jesty is over-seeing his heart issues and putting him on meds, and Internal Medicine is overseeing his other problems.  This sweet pup has had a hard life.  Please, Donate toward his medical, so we can get him on the mend and put a smile on his beautiful face. 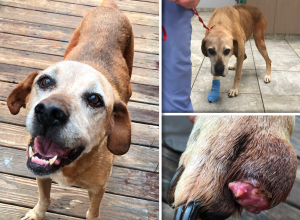