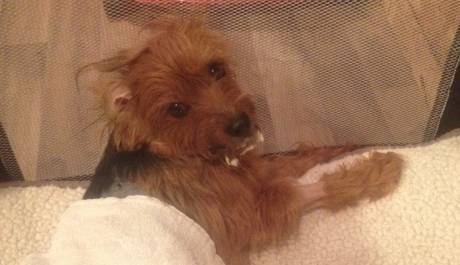 Your donation will help BENJI recover.

I have decided that Sundays will be our day to honor any abuse cases we have rescued that passed before we had a chance to let you get to know and love them.   We are very different than a lot of other Rescues.  We do not post for an animal until we have an animal with us, have run tests, and have a clear understanding of what is wrong and what needs to be done.

We were asked to help an 8-10-year-old Yorkie / Dachshund Mix that was found wandering around Hamlet, NC  barely able to stand up.  He was taken to a vet where x-rays were done and some tests.  The Vet said he was in a lot of pain and needed spinal surgery that he could not do.   We called a Neurologists and made arrangements for Benji to be seen that afternoon.   The Neurologist thought he had a compression based on his exam and surgery, but he needed an MRI first to determine the exact cause of the compression.   We gave permission for the Surgeon to go right in and do surgery after the MRI was done.   Two hours later, I got a phone call from the Surgeon saying Benji was not a candidate for surgery.    Benji's compression was from a massive tumor on his T2 Vertebrae.   Benji's quality of Life would not be there if we did surgery.  We immediately went into Hospice Mode to make sure this sweet pup's final days would be great.

Prior to taking Benji, we got as much information as possible about this sweet pup.  We were told that someone in the area knew the dog and the original Owner.  I made sure the Owner was contacted, so they knew about the dog that was found.  The Owner said on several occasions that her dog had died and that she no longer had a dog like Benji.   We never could get to the bottom of why she would say that, but we had to make her aware that we had her dog and that he needed major medical care.  I am so protective of all our animals and watch them like a HAWK that for someone to not want to know about their beloved pet is very foreign to me.

When I got the diagnosis for Benji, I knew his last days would be great.   We took away all of his pain, so he was not suffering at all.   He was able to get up occasionally and move around but mostly he just wanted to be part of the Family.   We had sweet Benji for four days before the tumor took its toll, and he could not move at all.   He was comfortable and loved and held in the arms of people that loved him when he crossed over the Rainbow Bridge.   In the end, that is all that matters.   Benji had a sweet personality that anyone would have loved.   We didn't have him long, but we had him when it mattered the most.   When you look up tonight, look for the brightest star and say a prayer for sweet Benji.  He is now free to be a young Spirited dog that stole our hearts from the minute we said Hello.