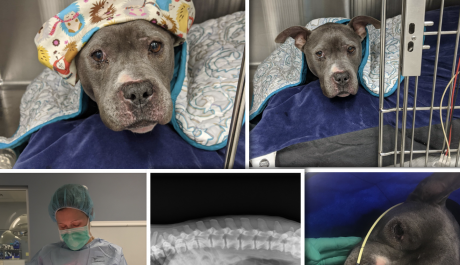 YORK, SC......We got an emergency text stating a sweet Blue Pitbull was picked up as a stray and was Critical.  She was emaciated and throwing up and was taken to the ER.  X-rays confirmed a Bowel Obstruction that was not passing.  The plea stated this sweet pup had two hours, or they were going to euthanize since they could not afford surgery to save her.

We named her Blue Belle and had her transferred to CVRC in Charleston, SC, where we knew they could save her.  Bowel Obstruction surgeries are tricky, no matter what is causing the obstruction.  The pictures we received showed a dog that had lived most of her life on a chain since her teeth were ground down to the nubs and were rotten.   We see this all the time with dogs that chew on their chains to get free.

Blue Bell's condition was so poor her age was hard to determine. We are guessing she is probably around five years old.  She arrived at the ER around 7:00 PM and was Triaged immediately. The ER Team did everything they could to stabilize her but knew she would pass if they did not call in a Surgeon to operate.  Dr. Rachel Seibert was called in at Midnight to perform emergency surgery on this beautiful pup.

Dr. Seibert found a foreign body with an area of devitalized Jejunum.  Unfortunately, she had to do a resection anastomosis, which is a connection made surgically between adjacent blood vessels, parts of the intestine, and other channels of the body. A large portion of Blue Bell's intestine had already died and had to be removed.   Because of Blue's weakened state, she did not do well under anesthesia, but they were able to get the surgery done and wake her up.  The anesthesia has still got her pretty knocked out.

An NG (Naso-Gastro) Tube was placed to remove any excess fluid in her abdomen and to keep her comfortable. The next few days are critical since Blue's intestinal organs and bowels had stopped functioning for several days and had collapsed.   We have got to wake up her system in a manner that will not inflame or damage the area that was resected.

The critical part is done, but Blue is not out of the woods by any means. She is getting 24-hour care in ICU until she can eat and drink on her own.  The other major factor is the object, which looked like an oyster shell, had damaged the Jejunum and caused a small area that appeared to have perforated at some point. The area was damaged but not leaking, so we have to assume bacteria from her intestine had leaked into her abdominal cavity. Dr. Seibert felt it was critical to start her on antibiotics to make sure she did not become septic.

Sweet Blue Belle needs all our prayers now.  She was critical before with no hope of surviving if surgery was not done.   The operation has been done, but the object did a lot of damage to her insides.  In the course of the next 24-hours, her body is going to react to this in a lot of negative and positive ways. The ICU Team is prepared to respond appropriately based on her body's response.

We already had our hands full, and the ER was already packed with our pups. It is critical for everyone to Donate toward this sweet pup and all the others when we reach out for help.  Our funds are going in the wrong direction because of the high-cost surgeries we have had to do to save lives.  Those that can give more, please do so, and those that can only donate a small amount, know it is all appreciated.

Blue Belle did not deserve the horrible life she has endured and sure should not have had to resort to eating an object that would kill her.   Every dog we take on and even those we cannot help deserve the very best medical care and unconditional love.  Please, help us save her and all the others.