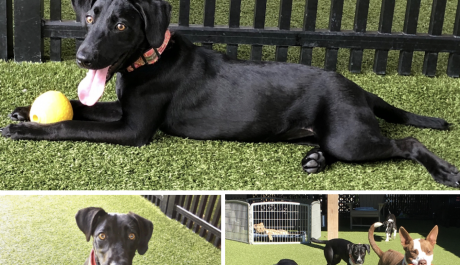 Sweet Brennah had a few complications come up that we were not expecting.   When she originally arrived everyone was focusing on the diaphragmatic hernia she had and getting her breathing stabilized.  They knew she had a broken jaw but it was not displaced and appeared to be pretty stable.

Brennah has her hernia repair and healed beautifully from the procedure without any complications.  Over the past four weeks, we noticed the underside of her jaw would go up and down with swelling.  No one seemed to be concerned until the area became a large hard abscess. Brennah had developed an infection that was preventing the fracture in her jaw from healing.  Part of the area had healed but one section was not going to heal without surgical intervention.

Our sweet pup acted as if nothing was wrong.  All she wanted to do was run around and play with every pup in the yard.   She had to be sedated and the area had to be cleaned out and the bone fragments removed.   Once the procedure was done, we then took her to another hospital where Dental X-Rays could be done to make sure the infected area was cleaned.   The x-rays showed the area was free of any debris that could cause her any further complications.

For two weeks our little bundle of pure Joy has been on soft foods and not allowed to chew on any toys.   Her restriction was lifted yesterday and was allowed to play with all of her best friends, eat kibble and chew on toys to her heart's content.  We each hated seeing her so sad during the restriction because she is a puppy that wanted to run and play.  Happiness was written all over her face, the minute the door opened and she got to join her playgroup.  Everyone was excited to see her outside the kennel, instead of in it.

Brennah is now healed and ready to be adopted.  She is a tiny Lab / Terrier Mix that loves kids and other dogs.  She is a typical puppy that entertains herself with toys for hours on end.  We have new frisbees made out of cloth that are indestructible.   The dogs love chasing, chewing and pulling on these as long as we will let them.  They also love sticking their head through it and running as fast as they can with several pups in hot pursuit.   Please, fill out our Adoption Application ASAP if you think Brennah would be right for your Family.

Thanks for giving Brennah the Gift of Life.   She now has the rest of her Life to run, play and love, forever.