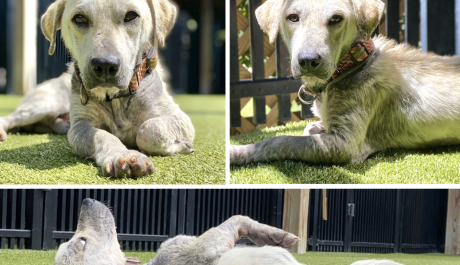 I am happy to report that dear Cash is finally out of the hospital and with us at Noah's Arks Rescue.  This fabulous pup has endured unimaginable hardship. His biopsy results came back that his kidney had been severed almost in two by blunt force trauma.  We are assuming this happened from being hit by a car. The thought of someone striking him hard enough to cause such injuries is something we do not want to envision.  He is not having any issues with his body adapting to having one kidney.  I believe the other kidney has not functioned for quite a long time.

An overload of parasites caused the Intessuseption the surgeons believe. The biopsy of the removed section did not show anything abnormal, which is why they came to this conclusion.  Initially, after surgery, a feeding tube remained in to give Cash's intestines time to recover from the procedure.  The Surgeons did not want significant food to be moved through that area to enable it to heal and get stronger.  After several days, Cash started taking food by mouth and has since been able to eat regularly and use the bathroom without any problems.  The feeding tube has since been removed.

We will be treating Cash's skin issues for several months before we start seeing a significant change.   The Demodex treatment is working, and his skin is not as red and inflamed as it was in the beginning.  His fur is still slightly rough and patchy, but that will improve as his skin does.

We had initially planned on taking Cash back to the surgical facility a week after his initial surgery to have his fractured leg either repaired or amputated.  After observing him walking while on his potty breaks, we have decided to give him more time before making that decision.  The injury is old and cannot be repaired.  The only option is to remove the leg or keep it.  I am leaning toward keeping the leg since he is using it to stabilize himself.  The leg does not appear to cause him any discomfort.  Once he becomes more active, I may change my mind, but for now, we are not doing any further surgery.

Cash needs a break from anything causing him further pain.  He is a tough little dog that has already endured far more than any dog should ever have to endure. We want him to start to enjoy his Life filled with nothing but unconditional love and support.

Cash is very shy in the beginning but warms up quickly the minute you lift him into your arms for lots of hugs and kisses.   If it were up to Cash, we would carry him around all day, every day.   He loves being cuddled and loved.   Over the next couple of weeks, we are hopeful his sweet personality will come out where he will want to play with other dogs.  Right now, he wants to be around but not play with them.

If you think Cash would be right for your Family, please, fill out an application for him.  He is going to make a fabulous member of someone's Family.

We are still taking in donations to cover his surgeries and his on-going medical care.  Any amount is greatly appreciated at this challenging time.  We hope everyone is learning to adapt to the new norm and finding Peace and Comfort, knowing we are each in this TOGETHER.   Warm hugs and much Love from everyone at Noah's Arks Rescue. 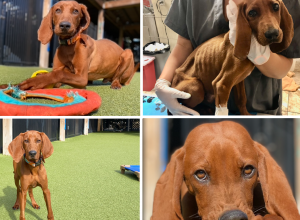