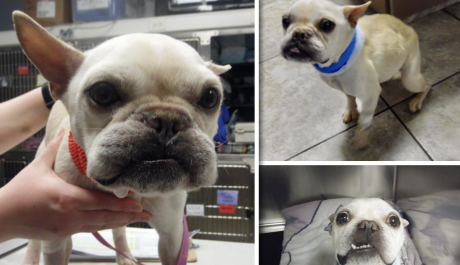 I am happy to report that adorable Charlie was finally able to come out of his Oxygen Chamber and stay out.  The biggest issue was Charlie is a Social Butterfly and would get overly excited whenever anyone came near his kennel, or he was out for potty breaks.  Charlie felt so good that all he wanted to do was run around and play until he was so out of breath that he had to go back on Oxygen. This past week we have attempted to keep him calmer while allowing him to be out of the hospital.

Dr. Jesty said it was going to take almost a month for him to become stabile and the inflammation to go down.  Each Heartworm Extraction Dog we do is very different.  Some bounce back quickly, and others require extensive medical intervention that helps them recover without further complications.

Dogs that have reached a stage where they have a significant heartworm burden where the worms have migrated to the right atrium, and vena cava are critical.   They have a myriad of complications from the heartworms that causes clinical signs of distress. Poor Charlie had all the signs of advanced heartworm disease that had progressed to the point where he could not get enough Oxygen to survive.  His weak heart was stressed to the max and could not supply what he needed to survive.   When this happens, your other organs compensate.

You have to have a healthy functioning heart to survive, whether you are a human or an animal.   Charlie's body had begun to retain fluid because the flow of blood going back into the heart was blocked by the worms.  When a dog gets to the stage where Charlie was, his heart, lungs, liver, and kidneys begin to fail, eventually causing death.

No animal should ever have to suffer such a horrible, inhumane death when there is a simple monthly treatment that will prevent heartworms from developing.  I believe any breeder that would allow this to happen should be charged with Animal Cruelty.   I know the authorities were investigating the so-called breeder, but I am sure a slap on the wrist is probably all they will get. Heartworm Disease is a slow, agonizing Death that should never happen to a dog.

If you love your family dog, get them tested for heartworms and then get them treated if they have it. If they do not have heartworms, then start them on monthly preventative, so they live the long life they were meant to live.   Charlie is improving each day and will finally have a chance at living a long life, not suffering but running and playing.

When we rescued Charlie, we had just taken in Ghost, and everyone was focusing on helping Ghost with all of his complications.  Ghost's bills were outrageous because he had one complication after another and had to remain in ICU for several weeks before we could amputate his leg.  Our big boy is now on the mend and healing beautifully.  We need to get Charlie on the mend and pay his bills so we can move on to the other Abused Dogs we have.

Please, Donate toward Charlie's Medical Bills, so we can keep doing what we do.  Noah's Arks Rescue is Donation based only.  Your generosity funds it.  When funds are not there for a dog, I step up to make sure each dog gets the medical care they need.   No dog is ever left behind because of a lack of funds.    Please, help us with these beautiful Souls.