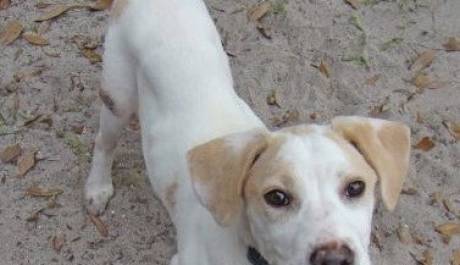 Your donation will help Cocoa recover.

GREENVILLE, SC.....COCOA is the most adorable little 4 month old beautiful Lab Mix that was picked up as a stray and taken to the shelter in Greenville.  She could not walk and could only drag her back legs.  She had to be rescued by the end of the day or she was going to be put to sleep.  They did initial x-rays and it showed she had two broken rear legs.  By the end of the day, we realized something bad was going to happen to this little Angel if we didn’t step up, so we did.  We had her picked up and taken to the vet and then was brought to the surgeons we thought would be best qualified to take care of her injuries. Everything was going as smooth as could be until we got a phone call from the surgical facility and they needed to talk to me.  Sweet little Cocoa (that was not making a peep) had seven broken ribs, both rear legs were broken in three places, her hip was displaced, her pelvis was broken in three places and her sternum was cracked.  To say I was shocked is an understatement.  There were no signs to indicate this little puppy had been hit by a car.  She had no internal injuries, other than the massive amount of broken bones.  It appeared someone had stomped on her repeatedly.  She did not have bruising that would have been caused by being kicked real hard.  Someone literally did this to her.  I am not shocked very easily because of all I have seen, but this little girl shocked me.  To know all the pain and suffering she had to have been though and was still as quiet as a mouse is heartbreaking.  You can tell by the pictures that she just wants to get along and not make any trouble for anyone.  We had a special orthopedic surgeon come in to do all of her surgery.  What we thought was going to be routine was anything but routine. Her surgery was long and extensive but went well without any new problems.  Little Cocoa is having to learn how to walk again.  She is still all kisses and sweet puppy breath to everyone thats looking after her.  She will be doing re-hab and will be in the hospital until she has recovered all of her strength and is walking normally.

COCOA is doing great and running all over the place since her surgery.

She is a beautiful, happy girl, ready for her new home.