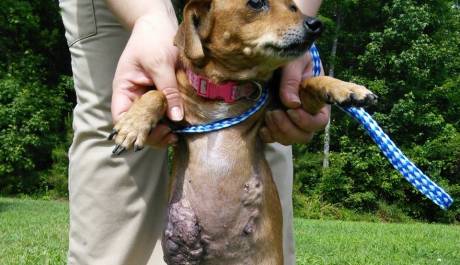 Help us, help her by DONATING.

Your donation will help COSETTE recover.

BECKLEY, WV…….We were contacted almost six weeks ago to help a 10-year-old Dachshund Mix that was picked up as a stray.    Her abdomen was covered with large tumors.   We sent a note back saying we were sorry, but we were just too full but would donate toward her care to a vet.   All throughout the day e-mails kept coming in begging us to help this sweet dog.  I sent notes back saying we wish we had room but right now we are just way too full with complicated abuse cases. Several more days went by with this nagging feeling in the pit of my stomach.   Any second I had that was free, I would monitor Raleigh County's Facebook page to see if this sweet pup had been saved.  Still, no one stepped up.  The tumors were just too much to handle.   People were arguing over whether to euthanize the sweet dog named Mercy at the time.  No one was jumping in saying they would save her.    I just couldn't believe that no one saw the HOPE and WILL to live that I saw in this pup.  They were all looking at the same pictures but seemed to be looking at the tumors and not the DOG.   My stomach was in such a knot that I finally broke down (as I seem to do far too often) and said I would take her.   It didn't matter if she lived one day, it would be the best day she ever had.   I made arrangements to get her to our vets in Columbia, SC and sweet Cosette's Journey began as a Free Pup where the sky was the limit.

The first thing everyone noticed was that Cosette could have cared less about the tumors she had.   They caused her a lot of pain, but she was free at last, and that was all that mattered to her.   She LOVED everyone she met and showered everyone with the most heartfelt sloppy kisses you could ever imagine.   Her WILL to live was amazing.   She had lots of things going on with her bloodwork, but nothing we could not handle.   After lots of consultations with the Doctor's overseeing her care, it was finally determined the tumors had to go.   It was going to be drastic surgery with a lot of recovery time, but this girl was up for the task.  We got Cosette as healthy as we could before she had her surgery.    The surgery was over four hours and went way into the night.    Our sweet girl did incredibly during the entire procedure.    She was monitored closely during the entire procedure to make sure if she showed ANY signs of distress, she would be brought out immediately.    The next day our little Wonder Girl acted like nothing had ever been done to her.  She was kept as comfortable as possible which enabled her to GO out and play if she wanted to.   Because she had all of her mammary glands removed along with the tumors, there was a large area that could not be closed.   The area had to be left open to granulate in for as long as it took.   If it did not granulate in, a skin graft would be done. She had daily bandage changes to prevent infection from settling in.   It all granulated in, and our little girl shined like the North Star at night.   All of the tumors, but one were malignant.    Today is the first day of low dose round of chemo for our beautiful girl in Charleston, SC with Dr. Kerry Rissetto.

I have posted a lot of pics of Cosette's Journey.  Some are very graphic, but the result is amazing.  Instead of posting several times a week, I chose to do a story of her entire Journey all at once which is something I have never done before.   Look through all of the pictures to honor all this amazing dog has been through.   Her age does not slow her down one bit.    She has thrived all along the way.  Look at the Hope and Love in her eyes.   Her eyes sparkle like Diamonds.

Cosette may have been neglected and then abandoned, but she never gave up HOPE.   She knew someone special would save her, and I am so glad we did.   Dogs like Cosette shower people with love all their Life.   They never dream in their latter years they would then be abandoned to fend for themselves.    It happens every day in this Country and is the biggest Tragedy of all.    Everyone wants a new younger pup to shower with kisses.   Not us.  We love them all and only adopt to people that have our same philosophy.    If you think you are that special Family that can love and nurture Cosette through her final years, please, fill out our Adoption Application.   Every day you will be blessed with the most amazing dog with the heart of a Lion and the zest for Life like a puppy.

Cosette has a very large bill to cover all of her surgery and care.  Don't let the fact you didn't meet her at the beginning stop you from helping us in the end.   Once you see the pictures, you will thank me for not showing them earlier to you.   The anxiety caused by such drastic surgery was felt every day.  I am glad only I and the Doctors had to experience it.    Cosette never knew anything but love during the entire process.   Miracles happen every day if you believe in them.    Meet our new Little Miracle Cosette and be prepared to fall in LOVE.

Cosette's DNA test came back that she is a Dachshund / Shih Tzu Mix.