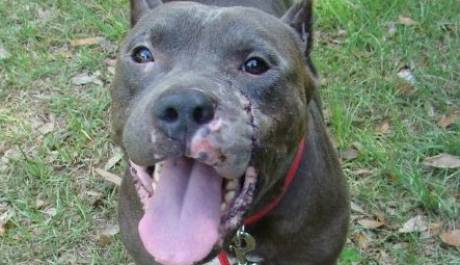 Your donation will help Costello recover.

BAINBRIDGE, GA.......Don’t let the face fool you.  COSTELLO is one of the sweetest dogs you will ever meet.  He was picked up in Bainbridge, GA by Animal Control and taken to the shelter there.  He was found wandering down a road with his head hanging low and most of the left side of his face almost torn off.  The pictures are hard to look up but the spirit and gentleness of this incredible 3-4 year old Pitbull / Staffordshire Terrier Mix will melt the coldest heart.  Costello is a victim of the worse kind of animal abuse.  It appears he was used as Bait for a fighting dog.  Bait dogs are submissive dogs that dog fighters use to practice on.  They are the dogs that are killed every day in a secret location all across the country, all in the name of sport.  It is the worst kind of abuse.  Costello was flown in by a private pilot to the Savannah Airport where he was picked up and immediately taken to a surgical facility where they began the long task of reconstructing his face and leg.  He is covered with old bite wounds and new ones.  He has a terrible chunk of skin and tissue that have been torn away from his leg. Veins will have to be moved around and skin will have to be found to compensate for the tissue loss.  He is heartworm positive and terribly thin.  Costello is not a fighter but has a wonderful fighting spirit which is why he is alive today.  Any other dog would have curled up and died with all of his injuries but this sweet dog kept walking until animal control came to get him.  We are so glad that he was wagging his tail when he arrived at the shelter or he would have been put to sleep immediately because of his injuries.  We were his last resort and we are so glad we grabbed him.  He is an incredible soul that will make a wonderful addition to a very special family.

Look at this incredible boy how happy he is.  He had surgery to repair his face and leg last week and is doing wonderful.  His face is healing beautifully.  It is hard to believe this time last week he was in so much pain and the entire left side of his face was almost torn off.  Dr. Rich Bink at Coastal Vet. Clinic did his surgery 15 minutes after he was brought in.  He then repaired his leg as much as he could, given how little tissue he had to deal with.  The leg is still swelling and draining a lot but but as tou can see from the photos, it is not holding him back.  Cos as I call him is the sweetest dog.  We have not seen any aggression toward people or other animals.  He is a love bug that wants to give kisses all day long and run around. It is like he knows he is finally safe and can enjoy his new found freedom in a loving caring environment.  We will have Cos for several months while he heals and is thoroughly evaluated before being placed.  Thanks for caring and helping us save this wonderful dog.

COSTELLO Update.......This is one of the most heartbreaking post I have ever had to make. Our dear sweet COSTELLO was rushed to the hospital yesterday after we were informed by his Trainer that he had been sick and wasn't eating and had been throwing up. He was taken to Emergency Care where he proceeded to arrest the minute he was brought in the door. We had them do CPR on him and put him on Life Support. From there, we had a cat scan done to see if he had something in his abdomen. It was determined he had an abnormality in his bowels. At 8:00 last night the surgeons all got together and decided he would not have a chance at survival if we did not do surgery to remove whatever was causing the problems we were seeing. They did surgery and found an object he had ingested that had obstructed his bowel and destroyed a section of it. They re-sectioned his bowel while he was on Life Support. They worked on him all through the night with every expert imaginable to see if we could get any brain function back. There is nothing I was not willing to do to save him. At 8:10 this morning, I had to make the decision to take him off Life Support. At 8:14 this morning, COS as we called him, crossed over the Rainbow Bridge. He was peaceful and was surrounded by people that loved him. Right now, we are still in total and complete SHOCK. It will be a long time before we get over the fact he is no longer with us. We loved and adored COS as we do all of the wonderful beautiful SOULS that have graced us with their presence and unconditional love. He will forever be a part of us and will never be forgotten. Please, say a prayer for COS and all those that loved him. We all need them now more than ever.

Our dear sweet boy crossed over the