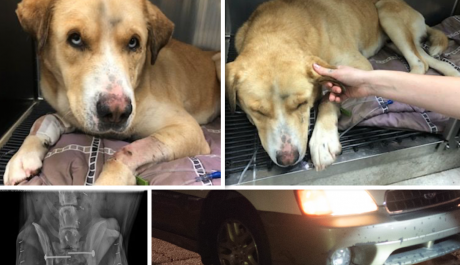 GREENVILLE, SC...I choose to believe most people are good. No matter how horrific the abuse, it is a decision that keeps me sane. That decision is tested daily in the abuse we see. This past week, one such case has pushed me almost to the limit of my beliefs. I do not know how a human being could physically do such inhumane treatment to an animal. The abuse had caused so much emotional hardship to so many that I decided it was best to wait before posting the horror.

A week ago, two full-grown dogs were pushed out of a vehicle on a major highway going 60 miles an hour. I have spoken to the Family that was behind the vehicle that hit the two dogs. The information I am giving you now came from the Family.

A young Lady and her Fiancé were driving down W. Blue Ridge Drive near the Aquatic Center around Greenville, SC. It was around 8:40 PM when they suddenly noticed their headlights reflecting on a bright light in the back seat. They slowed down as soon as they saw the flash but could not stop in time to avoid hitting the dogs as they were thrown from the backseat. One was a German Shepherd, and the other was a 3-year-old Lab Mix.

They called 911, and the Police, Fire Dept and Animal Control were each contacted. The poor shepherd was critical and passed away while waiting for Animal Control to arrive. The lab was trapped under their Subaru and required the front of the car to be raised before they could get him out. They waited with the shepherd and the lab for two hours and gave as much comfort as possible.

When Animal Control arrived, the lab they named Eli was taken to the ER in Greenville, SC. We stepped up for Eli when the plea went around, begging for help. We knew he had significant injuries and would require extensive medical. Eli was transferred from the ER in Greenville to CVRC in Charleston, SC. The original diagnosis was SI Luxation in addition to shock and trauma.

When we received dear Eli, they had been calling him Godfrey. We changed the name based on the young Family that had stayed with him during his ordeal. It took the ER Team several hours to determine what was initially wrong with Eli. It would be several days before all of his diagnostics were completed.

It was noted he had anisocoria (a condition in which the pupils of the dog's eyes are different sizes), old healed scars on the thoracic limbs, and an open wound on the right carpus with the tendon exposed. He was not able to stand at that time. Eli had blood in his feces and urine. Radiographs showed a bilateral SI luxation, left pubis fracture, and left ischial fracture. Eli had a crackling noise in his lungs, and x-rays revealed he had a large right inguinal hernia. His bladder was going into the inguinal hernia and needed to be repaired.

I decided it was too risky opening Eli up to do any repairs until we had a full discovery of everything wrong. I order a Cat Scan to see if there was anything fractured or displaced the x-rays missed. The Cat Scan showed multiple vertebrae pieces that had broken off from the impact. I then ordered an MRI to see if the spinal cord had been injured. The damaged vertebrae were very close to the spinal cord, but Eli did not show any neurologic impairment.

I spoke to his surgeons and went over every possible scenario. Essential surgeries were repairing his SI fractures and his hernia immediately. His spinal injuries were so close to his spinal cord that fixing those could paralyze him. We would only do his spinal fractures if he started showing signs of knuckling or ataxia.

It took five days to get all of the information together and a ton of money to do the tests alone. Eli was getting more stable each day and was a much better candidate for surgery. A urinary catheter was put in since his bladder was compromised prior to surgery. Dr. Steve Garnett did all of Eli's surgeries. Our precious pup did beautifully for each procedure and was stable for each of them.

Eli has weeks of recovery ahead, but the worst is over for this beautiful pup. We have enough information to determine what is wrong if he shows any new medical issues. You can't go through the trauma he did and not have a lot of injuries. We are prepared for just about anything. Now the healing begins for Eli and the wonderful Family that endured the traumatic event that changed their lives forever.

Eli was one of two dogs that were thrown from what appeared to be an SUV. I am putting both dogs' pictures up, hoping someone will come forward if they recognize the two dogs. Everyone would like to find the person that did this and bring them to justice. Any information would be much appreciated. I apologize in advance for showing the photo of the shepherd that passed. His picture is the only way to identify the dog. Our hearts are broken for the loss of a beautiful creature that should have been loved and cherished.

Please, DONATE whatever you can so we can get Eli all the medical care he needs to survive this tragedy. 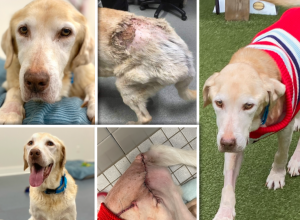 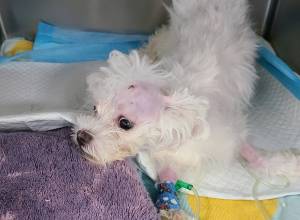