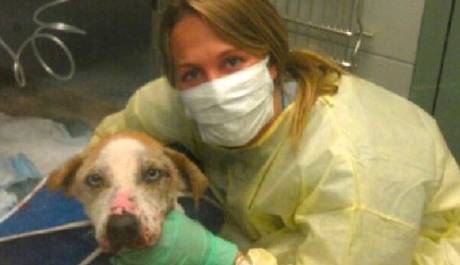 Your donation will help Ike recover.

COMMERCE, GA.....Sweet IKE is a 8 year old Cattle Dog Mix that was picked up by Animal Control in Jackson County, Georgia in the most horrific condition.  He is not skinny, so someone kept him in this condition without getting him medical care.  It looks like he has never had any medical care.  Ike has a severe case of Demodex that has gone on for so long untreated that he now have secondary infections all over his body in addition to yeast and fungus that has been growing.  His skin is oozing and weeping everywhere. In addition to this, he has a terrible Upper Respiratory Infection that has gotten out of control. We have sent off a culture and bloodwork to see the best course of action with the bacteria he is growing.  We are waiting for the results.  As if his life could not get any worse, he is HIGH heartworm positive and is clinically showing  signs of it on his x-rays.  Ike was admitted to one of our wonderful vets getting round the clock care when suddenly he began to go downhill.  His respiratory system was compromised from either the infection or the heartworms.   We decided he needed to go to Intensive Care in Charleston.  We did not want to take any chance of him crashing and not being able to move him later.  He is at CVRC (Charleston Veterinary Referral Center) in Intensive Care.  His skin has to be on the back burner until we get him stable and then we will address all of his skin issues.  Right now, our major focus is saving him.  He is in such horrible shape and the discharge from his lungs is so bad that we are having to determine if he has Distemper. Ike is scheduled to have an Endotracheal Wash done with cultures collected at that time and an Echo Cardiogram to determine how bad his heartworms are.  We are the last resort for the animals we save.  When we step up, it means no one else has and the possibly of the animal being put to sleep is imminent.  The downside is that an animal can catch just about anything while waiting in a shelter environment.  Since Ike was so urgent when he came in, the shelter transferred him to a hospital to be treated until his hold time was up.  They were not expecting anyone to step up for him.  They were wrong.  He deserves a chance just like every other abused, neglected animal.  We are giving him that chance.  Right now, it is up to him to fight.  We are doing our part and he has to do his or he will not make it.

Sweet IKE is still in Intensive Care and will be for several more days until the doctors feel like he is stable enough to go back to our regular Veterinary Hospital.  We did get his cultures back and he is growing everything imaginable.  The good news is that even though he does have a wicked Staph infection, he does not have MRSA.  His cough is beginning to get a little bit more productive.   Ike will let you do anything to him without a problem and we are having to do a lot.  He looks at you with those beautiful blue eyes and is so appreciative of someone caring about him.  He is so Gentle and Soulful that he warms your heart with how much unconditional love he gives.   Ike’s skin issues are a whole different bag of tricks.  Horrible does not even begin to describe just what a Hot Oozing Mess he is.  He is so full of yeast and fungus that he is having to have lots of soaks to try and dry out his skin so it can heal.  We are making progress but still have a long way to go.  The young lady in the picture taking care of Ike is my wonderful Daughter Jori.

It is with incredible sadness we have to let everyone know that dear Gentle IKE crossed over the Rainbow Bridge tonight at 7:30 PM.  At 3:30 this afternoon he suddenly became neurologically impaired.  He was disoriented and did not know where he was.  His pain level suddenly went through the roof.  We immediately brought in a Neurologist to do a thorough evaluation on sweet Ike.  Based on his lab results and his symptoms, it was determined they believe he had Bacterial Meningitis.  To know conclusively, he would need a spinal tap and an MRI.  I approved all of those for tomorrow.  After spending time with Ike, I suddenly knew I could not put him thorough that.  He had suffered enough.  We had his pain under control before but we could never control the pain he had now.  It was a terribly hard decision but I knew it was a decision I needed to make for him.  He had given his all and could not fight what was in store for him if he had meningitis.  We gave him medication to free him from all the pain and suffering and got him comfortable so he could finally relax and feel all the love everyone had for him.  He was finally at peace.  My Daughter had been looking after him and she came back in tonight to be with him when he passed along with his doctors and staff that adored him.  I so wish we could have saved Ike from a life of pain and suffering.  All we could do in the end was love him the way we always had and set him free where only we will suffer his loss and he will suffer no more.