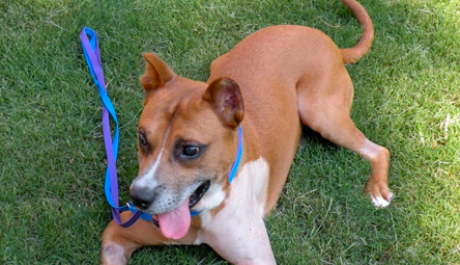 Your donation will help Jeremiah recover.

As every one of our Guardian Angels knows, we help the worst cases.  If this isn’t one of those cases, then I don’t know what is.  We do not have a clue (nor do the surgeons) exactly what has happened to this sweet, sweet dog.  We just know he was starved almost to death and has learned to live his life walking on his bent legs and is blind.  We are also in the process of seeing if we can restore his eye sight.  That will be done after his major surgery on his legs.  He will have several operations to get his legs corrected and this is the first one.

He was picked up by a good samaritan when he showed up in front of her house.  They tried to find out if anyone knew the dog but couldn’t find anyone that would claim him.  He was approximately 25 lbs. when they got him and is now about 30 lbs.

We have taken him into our foster/surgical program and he is scheduled to have surgery on Monday or Tuesday.  What exactly they will be doing will be determined once the surgery begins.  They will either rebuild his legs and put pins in or if the determine that is not possible, then his legs will be fused where he can stand upright but will not be able to bend in the middle but will at the foot.

If there is ever a dog that deserves this surgery, well, Jeremiah is it.  He is an active boxer mix, approximately 3- 4 years old that love to play and give kisses.  Not an aggressive bone in his body.  He gets along well with all animals.

When the head surgeon got in and observed Jeremiah today, &nbsp;he suddenly began to understand his legs a little better. &nbsp;He decided to operate on one of his legs today and put pins in similar to Frankie. &nbsp;To those of you that aren't familiar with Frankie, you can click on his link on our website and see the surgery that was performed on him. &nbsp;He had pins in his leg to straighten it for 12 weeks. &nbsp;He just got the pins out and is doing wonderful.

The surgeon believes someone injured Jeremiah's back leg during his growing stage. &nbsp;With the back leg broken his growth plates on the front legs did not develop properly. &nbsp;They twisted to compensate for an injured back leg. &nbsp;He has probably been like this since he was about 1-2 years old. &nbsp;He is approx. 4 years old now. &nbsp;The white you see on his muzzle is not graying but the mixture of being a boxer mix.

The surgeons did not fuse his leg together but put pins in. &nbsp;Jeremiah will be able to bend his leg this way. &nbsp;If he can put weight on his new surgical leg then they will do another operation on the other front leg the same way on Monday or Tuesday.

We are really excited about this procedure and are hoping and praying he responds well to this.

We will keep you posted.

Jeremiah is putting weight on the leg that was operated on and is walking on the pads of that leg.  He is doing so well and is such an incredible fighter that the surgeons think they will be able to operate on the other leg on Monday or Tuesday.  We are now raising money for the second surgery.  Please, help us make this happen for this incredible dog.

The surgeons sedated Jeremiah this morning and adjusted the surgical fixature to compensate for the bowing of the leg.  They have decided to wait two weeks before performing his next surgery to see exactly how well the pins are keeping the leg aligned.  He will always have some bowing but will be able to walk upright with it.  This will also give him time to put some weight on before his next operation.  Because he is so emaciated, he gets very cold the longer he is under anesthesia.  We want him to be able to stay under longer and therefore he will need to put more weight on for that to happen.

Jeremiah has left UVS and is now with his foster family.  They will be looking after him for the entire process.  They just adore this sweet boy.  It takes a special person to take care of an animal that has had this kind of surgery and is as fragile as Jeremiah.  He is doing wonderful.  He is mostly going to be in his cage so he will not damage his leg or do damage to his fixature.  He will have have assistance when he walks until he can carry the weight on his leg comfortably.  He is eating well and is slowly putting his weight back on.  He will be evaluated at UVS in 7 days to check his progress.  At that time they will determine when he can do his next surgery.  We are not going to rush the surgery if the first leg is not strong enough.

Here is a new picture of Jeremiah with his foster family.  He is doing wonderful and is slowly getting used to the fact that even though his leg is still bowed he does not need to fold it over to walk.

Jeremiah is doing wonderful.  We have an appointment to have his eyes checked to see if we can restore his sight on May 1st.

Jeremiah had his appointment with the eye doctor.  Dr. Glover said he has 'Progressive Retinal Atrophy' (PRA):&nbsp; It is an inherited disease in which the photoreceptor cells of the retina undergo a spontaneous degenerative process.&nbsp; Vision loss is progressive, complete, and irreversible.&nbsp; There is no treatment for PRA and it is not a painful disease.&nbsp; So he is officially blind.  As you can see, it doesn’t seem to be stopping him any.

He will have his pins removed in the next two weeks and then we will proceed with his next leg surgery and also have him spayed at the same time.

Jeremiah had his fixatures removed on Friday and is doing wonderful.  He is scheduled for his second operation on June 22nd.

This sweet boy had his final surgery on Monday.  He is doing wonderful as you can see from this picture.