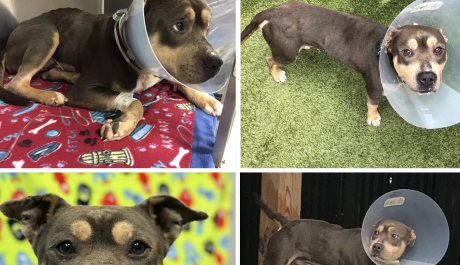 Adorable Keith is doing great since his bowel obstruction Surgery.  It took him about three days to start feeling better but he slowly came around.  Bowel Obstruction Surgery really takes it out of each pup we have ever had to do it on.  It usually takes about a week for the dog to get over nausea and feeling down-right crummy.   Another big problem we had with sweet Keith is he went too long with the obstruction and it messed up his electrolytes.   His surgery was pretty straight forward except for the fact the intestine had been blocked for way too long and they had to get his body to respond before they could proceed with removing the obstruction.

"Keith had exploratory surgery, jejunal enterotomy for a GI Foreign body and liver and Lymph Node biopsy for a small liver and enlarged LN's.   Keith was hypotensive intraoperatively and received two crystalloid boluses and a Vetstarch bolus intraoperatively.   While the abdomen was being lavaged it was noted that the intestines appeared dusky/dark.  A Vetstarch bolus was given during this time due to a low Blood pressure. After the Vestarch bolus, the intestines pinked up except for an 8cm section and incorporating the enterotomy. This section remained dusky and the pulses in the area appeared decreased. After several minutes the color and pulses in this section of intestine pinked up also.   We have since gotten him stabilized and his body is responding properly since the obstruction was removed."

During the procedure, Dr. Jennifer Au noticed an enlarger Lymph Node and Liver that we have sent off for a biopsy just to make sure he does not have any underlying condition that could cause him issues down the road.  So far, nothing has come back alarming but we are having the test results gone over with a fine tooth just to make sure.   Excellent Surgeons look all around when an animal is open since that may be the only time they get a chance to check out organs and feel around for any abnormalities.

Keith is also Heartworm Positive which we will treat over the next 120 days.  He has already started his 30 days of Doxycycline which the new Heartworm Society protocol has recommended and then a 30 day wait period before the injections begin.  Once he completes his 60 days, he will be cleared for his Melarsomine Injections.    According to the AHS, waiting until day 60 to start killing the adult worms with melarsomine allows time for Wolbachia surface proteins and other metabolites to dissipate, as well as time for the heartworms themselves to wither.  This protocol has been shown to decrease respiratory complications and mortality associated with heartworm treatment.

This wonderful pup has a chance at a new Life filled with unconditional Love and Support because you cared.  Thanks for being his Guardian Angel and Ours.