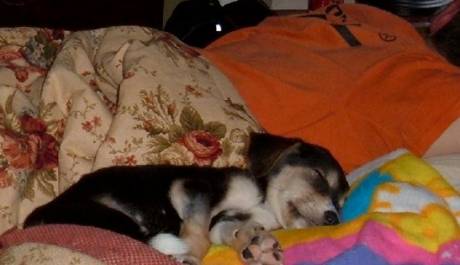 Your donation will help Lily recover.

This adorable 4 month old beagle trusted someone to look after her and instead was put in harms way.  According to the person that brought her in, Lily is a stray that came on their property.  They were feeding their large rotti food when she appeared on their property.  They put a bowl of food down by their rottie for Lily to eat and when she did the rotti grabbed her head in his mouth and crushed it.  Then, instead of rushing the puppy to the vet they kept her for one week without any medical care.  It was only after she was non responsive they finally decided to drop her off at the Darlington Shelter to be euthanized.  She was then taken to the hospital where she was kept alive.  She is slowly coming around.  The injury caused her to have neurological brain problems and she has lost sight in her left eye below the injury.  She is at Upstate Veterinary Specialist where she is undergoing extensive tests and evaluations to make sure she does not have a hemorrhage or any bone matter that could be causing the problems.  Lily will never be a normal puppy again but she is PERFECT to us.  We hope she will improve but right now she has a head tilt and is blind in one eye.  The left side of her head is shrunken in from nerve damage that has atrophied.  She is walking with a slight lean and is eating.  As I said before, she is perfect to us.

It just breaks our heart that someone allowed this to happen.  The wonderful staff at Windsor Hospital in Florence have loved her back to life.  She will be at the North Greenville Animal Hospital for some time to make sure the worst is over.  This is one of the sweetest puppies we have ever had the honor of saving.  Lily will always be a special needs dog and will need a special person to adopt her.

Lily we are remaining optimistic about.  She has not shown any signs she has improved any but hasn’t gotten worse either.  She will need a very special home where she can get lots of attention and lots of holding.  She is very scared now because she doesn’t appear to know what has happened.  She is blind in one eye from the accident and therefore that also has her fearful.  At times she will just cry and scream as if she is in pain but we do not have any indication that she is in pain just that she is scared.  She seems to settle down when she is held.  She needs that special someone that can nurture her back to getting her confidence with her new life as she is now.  She is a little Angel to us and everyone that meets her.

Her disabilities have not improved but they haven't gotten any worse either.  We have discovered that she also has an ear infection that could be causing some of her head tilt.  She can walk a little and it takes all her energy to do that.  The sight in her left eye we don't believe is ever going to return but only time will tell what abilities Lily will get back from her head injury.  The one thing that is constant with Lily is that she loves to be held.  She is very scared after her attack and holding her just calms her down.  She loves to nuzzle into your neck and fall sound asleep.  When she wakes up she just showers you with kisses.  Lily is in a foster home for the next couple of months so she can get used to her disabilities in a loving calm environment.  Lily will always be a special needs little Angel that will require a very special person that can devote a lot of time to her.  She is perfect to us.

Our dear Lily is doing wonderful.  We never knew what the outcome would be for her but we did know she would be loved and cared for no matter what her future held.  She is starting to run around and act like a normal little puppy.  She will always have a tilt to her head because of her head trauma and blindness in her left eye.  The best news of all is that her foster family has fallen head over heels for this little angel and have decided to adopt her.  Lily has them wrapped around her sweet little paw.  I am happy to say, she is spoiled rotten and loving every minute of it.

Lily has continued to make wonderful progress.  We have discovered that she does have a little sight out of her injured left eye.

It is with great sadness and lots of tears that  I have to inform everyone that our sweet Angel Lily has crossed over the Rainbow Bridge.  She started having a seizure yesterday and was taken to the emergency room.  We got her comfortable and soon realized the next morning that her condition was getting increasingly worse and she was in terrible pain.  As she has grown, the scar tissue has attached to her brain from the injury and is pulling on it.  neurologically she is unable to function but has terrible pain.  We did not want her to suffer so we had her humanly put to sleep surrounded by the family that just adored her.  She had several months of pure joy and bliss and love and we are very thankful for that.