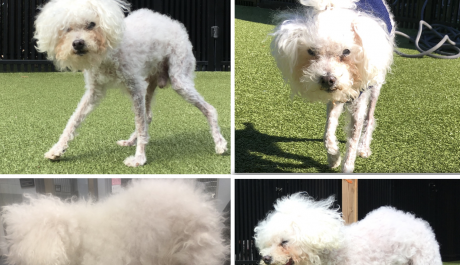 LAWRENCEVILLE, GA.....Life has been unbelievably hard for this desperate little poodle we have named Mr. Furley. We were expecting a five-year-old poodle and were shocked to see the saddest dog we have seen in a while.  Mr. Furley was picked up as a stray and appeared to be closer to ten years old.

When he arrived, he could barely walk on his front legs and was ataxic.  His eyes were matted over, full of goop and he was one big ball of mats.   He looked like he was larger than he actually was because of the matted fur.  Once the mats were removed, we soon realized Mr. Furley was frail and emaciated.   He was taken to CVRC in Charleston where everyone there needed to oversee his care since he had so many things going on that had to be ruled out.

Poor Mr. Furley looks like he was used as a breeder pup for most of his Life.  His spine is so deformed in the middle that his rear-end is almost under his mid-section.  It looks more like he was put in a kennel that was way too small for him for breeding purposes.  His body had adapted to the small enclosure and is curving under itself.  If Mr. Furley is five years old, then his body has endured ten years of abuse and neglect.

He has cataracts in both eyes and corneal abrasions, a grade 3 heart murmur, a penile mass and that does not even begin to describe spinal disk issues he has.  Now you know why I said he has to see everyone in the hospital and then some to get him stable.   The ER Techs worked all night to remove mats from his body and then finally decided it was best to shave a lot of his fur to get him comfortable.

Once Mr. Furley was free of mats and was able to move freely, we soon realized the severity of his neglect.   Below all those mats is the sweetest, most precious pup you will ever meet.  All he wants is to be in your arms being loved and caressed.  How could anyone have allowed this precious pup to be neglected in such a horrible manner?

We see so many abused, neglected dogs that are seen as nothing but a breeding machine to be discarded when they can no longer produce puppies to sell.    That appears to be what happened to Mr. Furley.  He was no longer needed and was therefore discarded like trash.   A saying we use often is, "One Man's Trash is another Man's Treasure."   Below all that fur we found a beautiful Diamond named Mr. Furley.

We love this Little Man more than you can imagine.  He is going to make someone the best dog imaginable once we get him well.   Please, help us, help him by Donating toward his Medical Care and Rehab.    Please, fill out an application for this sweet pup if you love to sit around and read with a fabulous dog in your lap.   Mr. Furley would be perfect for you.  He loves the warmth of a human and loves his person, unconditionally.