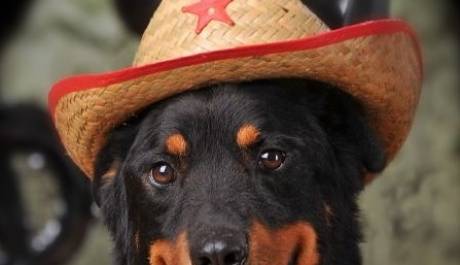 Your donation will help Norman recover.

It is with great sadness we have to let everyone know that sweet NORMAN crossed over the Rainbow Bridge at 5:45 this afternoon.  Last week we took him to the ER in Charleston because he suddenly became very lethargic and did not want to get up or even eat.  Now this is a boy that loved to eat and rarely missed any meals.  We did a scan of his lungs and discovered the large tumor we had removed on his leg 6 months ago had spread into his lungs.  His labored breathing was from the tumors and the damage heart worms had done to his heart prior to us treating him.  We got together with his Oncologist and decided to keep him in ICU for several days to see if this was a temporary set back.  After several days, he started feeling much better and we decided to start him on chemo to see if we could stop the progression of the tumors.  We brought him home to closely monitor him and prepare his body for the new meds he would have to take.  Over the next 5 days, he became very painful and did not want to even get up.  We rushed him to the ER this afternoon, did another scan and discovered his tumors had already grown significantly since the prior week.   His cancer came back suddenly and was mean and aggressive.   I decided our dear boy's Quality of Life was not what we wanted for him and made the hard decision to help him cross over the Rainbow Bridge.  We never allow any of our dogs to suffer if there is nothing we can do.  All the love in the world was not going to save him now.  The hardest part of loving an animal is loving them enough to know when to say good-bye and end their suffering.  Our dear boy is now running free.  He is now one of our Guardian Angels that looks after us.  Please, take the time to read his story of survival.  He lived most of his life with a massive tumor on his leg.  When we removed the tumor, we had to also remove his leg.  Norman never complained and was full of life.  He acted like a young dog running around.   He may have only been with us for six months but it was a great six months.  He got to be a dog that was loved and adored by everyone.  He will forever be in our hearts and be part of our cherished Noah's Arks Rescue Family.