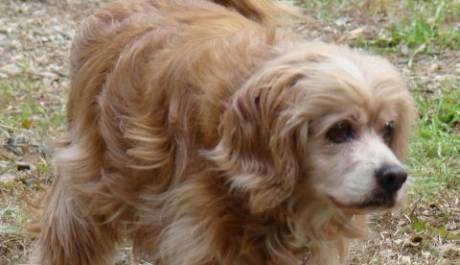 Your donation will help Ozzy recover.

DECATUR, GA.....This sweet older dog has been subjected to a life of sheer horror.  OZZIE is a 10+ year old cocker that was abandoned behind a shopping center in Decatur, GA in an old wire kennel.  He was in the kennel with the remains of another cocker that we suspect was his buddy.  The other cocker had been dead for some time and had begun to decompose.  The video cameras behind the shopping center did not give the authorities any clue as to the person that did this.  The condition Ozzy was found in was beyond terrible.  Ozzy is blind.  He has bi-lateral cherry eyes and also dry eyes.  He cannot see out of either eye.  He will be going to see our eye specialist to see what can be done, if anything to restore some of his sight.  He is high heartworm positive and  we also think he has Cushing’s Disease based on his bloodwork and the way his abdomen is swollen. The thought of this sweet dog living in this confined space while his companion died is horrible to imagine.  The other animal had already begun to decompose and is nothing but skin and bones and fur.   As full as we are, there was no way I could sit back and allow this older dog to be euthanized after living such a horrible life.  OZZY was in such terrible shape that his fur had to shaved down.  We have opted to only show one of the original photos with his companion.  The other pictures are just too sad and graphic.  The new ones give you a better idea of just how bad this poor dog is.  On top of all this, he has a large pendulous mass on his left foot that we believe is a benign adenoma.  The first thing we are going to do is stabilize him and work on saving his eyes.  Once he is stable, we will begin to address all of the other issues he has.  This sweet dog deserves a life without suffering.  A place where someone is looking after him.  He doesn’t even know what it feels like to be free and loved.   Ozzie is a special needs dog that will remain with us, until we find that special home for him.

After doing extensive testing on OZZY we have determined that he does not have Cushing's Disease but his system has been severely compromised  and he needs to be on liver support which we are giving him.  We have removed the tumor he has had on his foot for what appears a very long time.  The sad news for us but one he has been used to for a long time is that his blindness is irreversible. in both eyes.  We have sent him to the best eye specialist around and there is nothing that can be done to give this wonderful dog his sight back.  he has been blind for some time and is used to his blindness.  We were so hopeful that with the best care and the willingness to do any required surgery we could get him sight in one of his eyes.  We are now forced to deal with the reality that there is nothing that can be done.  His injuries have been going on for so long that they are not beyond repair.  It does't change how much we love and adore this incredible dog.  His life is so much better that it has ever been and will continue to improve.  Thanks for caring about our handsome boy.  He is one in a million.

Look how beautiful OZZY looks.  He is ready for his new home.

He loves everyone but cats.