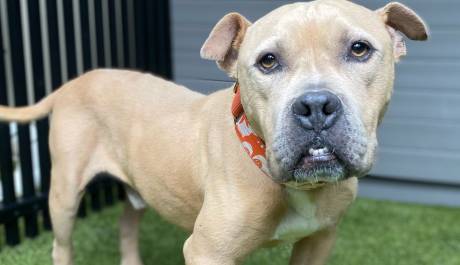 Your donation will help PLUTO recover.

I decided we all needed some good news, and Pluto is the perfect candidate to share all the good coming his way.  Our sweet pup could barely walk when he first arrived.  His hip had been displaced for so long that it had changed his entire gait.  He had a giddy-up in his step that you would typically find in a very old dog.  His ears hurt all the time from infection, and he could barely hear what you were saying.

His idea of hearing was reading your lips.   All he understood from reading your lips was, come over here and kiss me, which he did promptly.   Pluto wins the contest for being one Cool Pitbull. Even when he was having difficulty eating from the Horseshow Crab lodged in his intestine, he played it cool.  He has the best sleepy bedroom eyes that draw everyone in and makes you want to take a nap with him.

He now has a very cool walk with his personality and can hear everything you say, even if he ignores it.   Pluto has not had one problem with any of his procedures.  He breezed through each with the careless, lazy attitude of what's the big deal.

Unfortunately, tropical storm Elsa blew in, and a tornado formed that destroyed part of the hospital when a tree crashed through the building. The Fire Department showed up and removed Pluto and another couple of dogs safely out of the building with the help of the Staff.  Rain was pouring into the hospital with no way to stop it.

Pluto is so lucky to have survived the tornado that I am thinking of calling him Mr. Elsa or Lucky. Whatever happens to this adorable dog, he takes it all in stride.  Nothing fazes him. To play it safe, he will be having his shots done at Noah's Arks Rescue, where there are no trees that could fall on our building if a storm blows in.

We have so many new dogs in our care that are critical; it is a joy to write an upbeat update.  Thanks for helping us with this special boy.  He is a fabulous pup that is winning the hearts of everyone he meets.  We are not even close to paying his medical bills.  Please, Donate so we can pay Pluto's bills and move on to the other pups in our care.