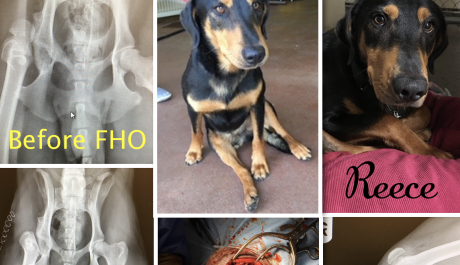 HAW RIVER, NC......Poor REECE was getting the short end of a stick.  Volunteers and his Rescue Coordinator were begging for me to take this beautiful one-year-old Hound.  I said NO for weeks because this is surgery someone else could do, and he was a sweet Hound that should go to a Hound Rescue. I said No, No, No over and over again. On week three, I got a final plea for this sweet pup before he was put to sleep.  He needed help.  If he didn't get the surgery, he needed there was no point in keeping him alive since he was suffering.

Where are all the Hound Rescues for these amazingly sweet dogs?  We are all full, but I work hard to find a way to help one that has the potential to have a great Life.  I told the Rescue that I would do his Surgery but did not have any place for him to go after so they had to step up and find him a Foster during his Rehab.  They jumped up and down and said they had one for dear Reece. Problem solved for one more special pup.

Reece was SAFE, and now we just had to fix his leg which was now an old Injury.    Dr. Michelle Nanfelt at CVS sent me a note saying this was going to be an impossible, difficult surgery because the injury was too old and too much scar tissue had formed.  I literally begged for her to give him the best chance of going in and doing the procedure. She agreed and I am sure was upset with me the entire time during the surgery.

Reece had an old hip injury from some blunt force Trauma.   We don't know how he got it since he was picked up as stray limping. No one came looking for this beautiful pup during the three weeks the Shelter had him. Reece's femur head was out of socket, and scar tissue had formed where it was.  He could not rotate his hip joint, and it also affected the movement of the rest of his leg. His leg was locked into an awful position which caused him to lose flexibility in his stifle.  His muscles had contracted because of this.

I put pictures up with before FHO and after FHO to show precisely what is done during this procedure.  The scar tissue has to be cut away to restore movement, and the head of the femur is removed. Animals adapt well to this procedure because more scar tissue forms that hold the hip in proper position.  The surgery will allow his stifle to come down, but he will need daily Physical Therapy for this to happen.

Reece is one lucky pup that after weeks, his Shelter did not give up on him.   A lot of other shelters would have euthanized him once his Stray Hold was up.   Reece is one of eight new dogs we have taken on that are in ICU or having surgery as I am typing this.  Please, DONATE toward each one of these pups, so we do not go under in a week.  If you can't Donate, then forward to your Friends so they can help us with these pups.  If all else fails and you need to buy a Gift for someone special, go to our Not for Profit Gift Store, Fetch Mkt. and SHOP.   All of the profits go toward saving these abused animals.