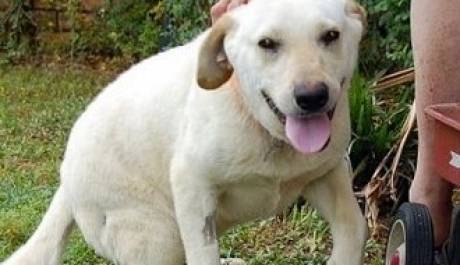 Your donation will help Snoopy recover.

This incredible 9 month old pup was found leaning up against a gate in a terrible emaciated state near Georgetown, Georgia.   The people that were looking after him put some weight on him but could not help the other problems he has. They called Angel Dog Rescue and Susan called us.  It looks like he was either whipped or beaten with something.  It could have been a car accident but we don’t think so.  Either way he was severely neglected.  His neck has two rings where he had been tied up and the collar had become embedded.  Snoopy has sustained a distal right femur fracture and right proximal tibial fracture that have both healed as malunions. The femur healed with an angulation, resulting in the femur being shorter. The tibia healed with a very steep tibial plateau angle and lateral deviation. On palpation, he seems to have a partial cranial cruciate ligament rupture.  As if that wasn’t enough, he has scar tissue all around his groin area that is preventing his penis from going back into it’s sheath. He also has a broken toe that is now severely deformed because it was left hanging without any treatment. All of these issues are causing this sweet pup to be in pain all the time and have very limited movement.  He has to move in a crouched state all the time.  If we do not correct his penis problem he will die from an infection.  One of these injuries is bad enough but all combined is just so sad for this sweet loving boy.  The surgeons all agree, this boy is worth saving and fighting for.

We are not ones that give up on animals.  If they show us they want to be here and are loving and sweet under the worst conditions, we will do whatever it takes to help them get well and find them a wonderful home.

UPDATE....He had his first surgery on Thursday to repair his genital area.  The scar tissue band that was restricting his penis has been repaired.  We will now have to wait and see how much the penis will retract into it's sheath.  Only one inch is visible now which is a huge improvement from the way he was.  Before we take any drastic measures in this area, we will allow his body to adjust to the change and see if it will go back in.

He is feeling good today and if he continues this way, they will consider doing another procedure today.  It all depends on how comfortable he is.  If he isn't, then we will allow his body to adjust before we proceed.  This sweet boy has a long road ahead of him but we feel really good about the decisions we made to go forward with his surgeries.  We still need funds to complete all of the operations.

Snoopy had his second surgery on Thursday and is doing great.  He is rather sore from the surgery he has had but is improving every day.  We were able to pull his penis back in almost three inches but he still has almost 1/2 of an inch remaining out.  We are comfortable where it is now and if it doesn’t go back in anymore then that will be fine.  His leg and hip surgery went well.  We were able to repair the areas that were damaged and restore a lot of his form back to a more normal posture.  He still has very tight muscles that will require rehab to stretch them out but that is minor compare to where he was.  He really is a sweet dog that just loves to be loved on.  If you are interested in Snoopy, please fill out our adoption Application and let us know to expect it.

Snoopy is coming along nicely and is beginning to use the one leg that we did the most surgery on.  He is a sweetheart of a pup and will make someone a great member of the family.

Sweet Snoopy has two more surgeries scheduled.  He has what we call...Happy Tail Syndrome.  He is so happy that he beats his tail on everything.  To the point where it is bleeding all day long.  We are going to have to remove some of his tail because is is constantly infected.  This is done quite often and we think it will solve the problem.  He also has more surgery to bring his penis back in the sheath almost all the way.  He is such a happy dog that is waiting patiently for that special person to adopt him.

Our wonderful little Snoopy is finally beginning to feel better.  We will have him for about two more months so we can do surgery on his neck from all the rope damage that was done.  He is a sweetheart and will make someone an incredible dog.

Snoopy has become the vet mascot.  He supervises all of the surgeries and anything that is going on there.  He is also the meeter and greeter for all new patients.  He has a few more surgeries to go but is doing wonderful as you can tell from the picture below.  We love this courageous boy.