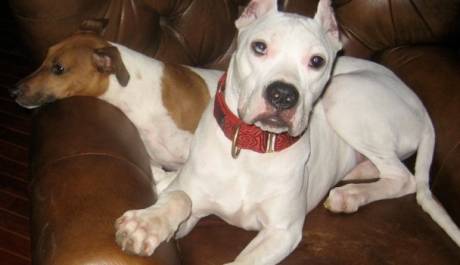 Your donation will help Snow recover.

This beautiful two year old dogo argentino / mix was picked up by Greenville County Animal Control yesterday.  He weighs about 28 lbs. He was tied to a pallet with a two feet rope.  He couldn’t even walk he was so far gone.  He was taken to North Greenville Veterinary Hospital where he was given transfusions of blood to keep him alive. He was so close to death that his gums were completely white.  He is emaciated and covered with fleas and loaded with parasites. The only thing eating were the fleas and parasites and they were literally bleeding him to death.  God knows how long he had been there without any food or water.  He had to have been there a while to be in such bad shape.  We have no clue as to who did this to him.  He will be at the vet for a while until we get him stable and on the mend.  We will also need for someone to also foster or adopt him, once he is medically able.

We are finally feeling like the worst is over.  When a dog gets this sick and it's body begins to shut down, you can't just turn things around by feeding the dog.  It will be a while before Snow's body is able to take in food without it running right through his body.  His blood count is coming up and he is much more alert than he has been.  It will take a while for his immune system and digestive system to get back in balance.  He is also being treated for every parasite known to man and also for the terrible flea problem that was taking all of his blood.  Every day he will improve.  As soon as we get a new picture, we will post it on this web page.

Snow is doing wonderful.  He is very thin but on the mend.  Talk about a sweet boy, he is it and is going to be so beautiful when he fills out.  He is being treated for coccidia now but is getting better.

Vincent has been adopted and is with his wonderful family.