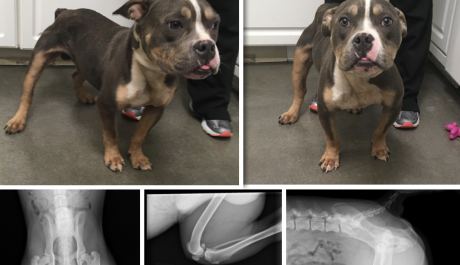 DOBSON, NC........Adorable Stitch is a one-year-old Mini Pitbull / English Bulldog Mix that was picked up as a stray and brought to the Surry County Animal Control in Dobson, NC.    We were contacted because he needed extensive surgery for his rear legs that were bowed out.

We see a lot of Bully Breeds since all we do are significant medical abuse cases.  What we have noticed is the breeders are either breeding for a large size dog for fighting or a short, squatty dog.   Stitch was reproduced for the latter.  The problem with mixing up dogs to get a particular genetic characteristic is you create an imbalance.   In Stitch's circumstance, you end of with shallow patellar grooves in addition to other genetic problems that affect walking.

Stitch is bowlegged on his rear legs and has Grade 3/4 luxating patellas which he developed at a very young age because of poor genetics.  To compensate for this condition, this precious pup which only weighs 39 pounds and is solid muscle HOPS.  Both of his rear legs move together in the same motion at the same time.   He cannot walk normally because of his condition.

We had Stitch taken to the ER in Columbia, SC to see what could be done. The Orthopedic Surgeon recommended doing two surgeries: knee- block trochleoplasty, medial release/lateral imbrication & tibial tuberosity transposition surgeries four weeks apart.   We did the right rear surgery, and Stitch has been recovering from that.   It is a long recovery that requires extensive rehab.

We are not going to do the other side until we are convinced the first procedure was successful.   Stitch is still hopping and learning how to walk with his repair.   We have been doing this long enough to know that dogs that have bilateral surgeries do not always get the predicted outcome.  For now, we are going to allow Stitch time to recover before we consider doing his other procedure.

Each surgery is very costly because it requires a lot of reconstruction to repair the kneecap and the tissue around it.   We are only raising funds at this time to cover his initial surgery and will send around another request if we decide he would benefit from another procedure.   At this time, I am not sure he would benefit from a. second procedure.   Please, DONATE to Stitch's Medical Bills, so we can help more dogs like Stitch that have been bred to do something their body was never supposed to do.

This sweet, adorable pup is a pure delight to be around.   He loves other dogs and has never met a stranger. I believe he will always be hopping around.  He has adapted, and it does not slow him down one bit.  Life is good in Stitch's World and is precisely the way it is supposed to be.

Thanks for helping us with this sweet, beautiful pup.  I would like to think the initial surgery has caused Stitch to have less pain in his knees.  Nothing seems to bother this special boy, so it is hard to tell.  He does allow us to do Rehab and manual manipulation which he could not tolerate in the beginning. Thanks for giving Stitch the best possible chance of walking normally.  We greatly appreciate your support.