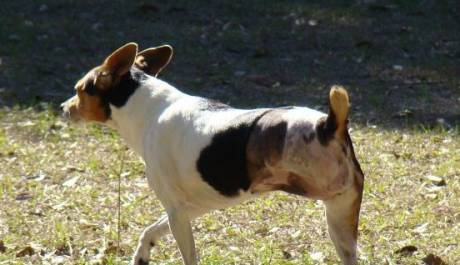 Your donation will help Tinkerbell recover.

FAYETTEVILLE, NC.......Tinkerbell is a 6 year old smooth Fox Terrier that was picked up by Animal Control in Cumberland County.  The owner of this incredibly sweet dog was told they had to get medical care for her or they would be charged with animal abuse.  After a period of time the dog was checked on and it was discovered she had never been taken to a vet and the tumor had become massive.  It was now wrapped around her leg and was hindering her ability to walk comfortably.  Tinkerbell is a very small little dog that was being consumed by this horrible tumor.  Animal Control made the owner sign her over to them or they were going to press animal cruelty charges.  Now that they had her, they had to find some way to get her taken care of or she would have to be put down.  They had decided she had suffered enough with this but wanted to save her life also.  We were contacted and immediately decided to take her into our medical program.  The first thing we noticed was that Tinkerbell was having a difficult time breathing.  We did  a test for heartworms and also did an x-ray of her lungs.  She had lot of inflammation in her lungs and was heartworm positive.  She has been at the hospital for two weeks being treated for the inflammation and to get her stable before we did the surgery on her leg.  She has been great during this entire time other than being uncomfortable with her leg at times.  Yesterday, the surgeons decided she was well enough to do the surgery.  We opted to do whatever we could to save her leg so she could have a pretty normal life after this.  They were not able to get all of the tumor because it had taken over so much of the leg but they took as much as they could.  All went well and they brought her out of the anesthesia.  They soon realized that she would not stop bleeding so they had to put her under again and do everything possible to keep her from bleeding to death.  Our sweet little girl was bleeding to death right in front of their eyes.  They finally got the bleeding under control but she had lost so much blood she was not stable at all and was barely holding on.  She was rushed to the Emergency Veterinary Clinic in Columbia, SC where she was given a transfusion and fluids to keep her alive.  It has been touch and go for this little girl since yesterday afternoon.  After talking to all of the doctors and the surgeons, we have now come to the conclusion that the only way for her to have a chance is for us to amputate her leg and rid her body of all  of the tumor.  It had been on her body for so long that it had grown hundreds of tiny blood vessels that were causing her to bleed to death.  No matter how much blood we gave her, she would bleed it out.  They are now preparing her for surgery to remove her leg and hopefully save her life.  Right now, she needs every prayer we can send her way.  She has a 50% chance of making it but has no chance if we do not do this for her.  When an animal is in distress like this, we do not have the luxury of time.  It is either do whatever you can to save their lives or you have to let them go.  We are not going to let her go without exhausting every possibility to save her life.  We need everyone to give something for this sweet girl.  Her bills are unbelievably high and are going to double and possibly triple before we are done.  We will post an update later once she is out of surgery.  Please, forward to everyone you know.

TINKERBELL Update......She made it through surgery but is still in critical condition.  She will have to remain in Emergency Intensive Care until she is stable.  They expect her to be there for several more days.  Our sweet girl is now a tripod.  Her blood pressure is still too low and we are having to give her special fluids to elevate it.  Our new problem is that she does not want to eat and hasn’t eaten in several days.  We are hoping it is from all of the surgery and the pain meds she has been on.  Tomorrow will tell us a lot more about her condition.

Tinkerbell is doing amazing for a little dog that has been through so much trauma from his tumor. Her biopsy came back positive for an aggressive for of cancer. We have not seen any indication that the cancer had spread to any part of her body and think we got all of it when we removed the leg. She is feeling wonderful and even though the oncologist is not optimistic, we are. If the cancer was going to kill this sweet girl, it already would have based on the size of the tumor on her leg and how long it had been there. She could be with us for a year or she could be with us for 10 years. We do not know but feel like she will be with us for a long time. We are trying to find a wonderful loving home for this incredible dog that will understand what she has been through and be willing to give her lots of love and joy for as long as she has. Please, fill out our Adoption Application if you think you are the perfect Family for her. She loves everyone.

TINKERBELL is ready for her new home.