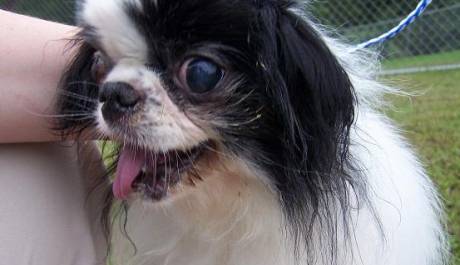 Martinsburg, WV.......OREO is a 12 year old Japanese Chin that was picked up as a stray and brought to the shelter in Martinsburg, WV.  Oreo was the original dog we were contacted about that was crying, scared, blind and deaf that we agreed to take.  In the process of getting someone to go get him, we discovered Shasta in the back of her kennel with no hope in sight.  We grabbed them both and as we say in the South, “Got the Hell out of Dodge.”  We have had Oreo for three weeks.  We waited to post him because we had to do some major surgery and he had to get well before we could do that.  Oreo has had Dry Eye for so long that he is totally blind in his right eye and very little in his left eye.  When we received him, he was a mess.  He couldn’t see or hear and he was covered in his own feces.  He had obviously been on his own for a very long time.  As you can tell from the pictures, Oreo has a broken jaw.  He has had to live this way for quite some time.  He had only a few teeth when we got him and those were all infected.  His entire mouth was one big infection.  We have since restored as much sight as we could to his left eye, his hearing has been restored to where he can hear about 50% and we have done a bone graft on his mandible to try restore his ability to eat better. Only time will tell if the jaw surgery was a success.  Right now it appears to be but we are being cautiously optimistic. The few teeth he had have all been removed and we have restored his gums to where all of the infection is now gone.  Oreo had a terrible Upper Respiratory Infection that is now finally going away.  The best part is that none of this has stopped this incredible little dog from loving life.  From the minute we got him and he realized he was safe, he began to feel better.  Every day he gets happier and happier.  He runs all over the place.  His sight has not stopped him for one second.  He eats like a champ now, even though he does not have any teeth.  When your life has been filled with pain and suffering and all of that goes away, you have an opportunity to live the rest of it like a teenager and boy is he doing that.  You can’t help but smile whenever he is around.  He is the tiniest little 7 pound bundle of joy you will ever meet.

I am happy to say that OREO is doing wonderful.  His jaw surgery seems to be holding and we now believe the graft we did is going to hold.  Happy does not even begin to describe this little bundle of energy.  He runs around with his one good eye like he has perfect vision.  Nothing is holding him back.  He has completed all of his treatments and is now ready to go to his new home.  We believe OREO has a lot of life left in him and will be around for a long time.  He is the perfect little dog with the cutest smile that is now acting like he is a puppy.  Thanks for caring and making this possible for Oreo.