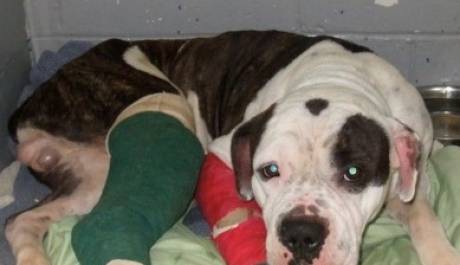 Your donation will help Titan recover.

This sweet two year old American Bulldog and his playmate were lured into the yard of a neighbor in Richland County, SC. They were then trapped by a vehicle and used for target practice with a .38 gauge handgun.  These are real bullets that just destroy everything in it’s path. His pitbull playmate was not as lucky.  He was shot and then thrown over the fence to die.  He had so many gun shot wounds that he had to be euthanized.  The owner of Titan ran into the yard and saved Titan or he would also be dead.  Titan is as sweet as can be, even with all his injuries, he just wants to give kisses.  He has a radius/ulna fracture, a right tibia fracture and lost several toes on his right rear leg.  According to the owner, the police were called and nothing was done to the neighbor.  We are outraged by this and have an investigator with the SPCA seeing what he can do to go after these people.

This sweet dog has a long road of surgery ahead of him to save his legs.  He will remain at the surgical center for several weeks.

Titan will not be going back to his owners.  He has been signed over to us.

Titan is still recovering from all of the gunshot wounds.  The story on this sweet dogs just keeps changing.  As soon as we get the true facts from the owners we will put it up on Titan’s page.  He will be at the hospital for another week while his wounds stop draining.  He is such a big goofy dog that gets up and walks around on his own with all the injuries he has.  You can tell that he is uncomfortable but he does not complain at all.  He is just so thankful to have to have people love and adore him.  We will be looking for a wonderful foster home for him to go to while he recovers.  Please, drop me a note if you are interested.

We have now gotten the police involved with this case.  The SPCA investigator did not do as he said and contact the police.  He completely dropped the ball and we had to call them ourselves.  We are very upset with how little regard the Columbia SPCA cared about Titan and what happened to him.  We are happy with the investigator that has taken over the case.  The story just gets more and more confusing.  I think all individuals involved are into serious drugs.  As soon as we know something different we will let you know.

Sweet Titan is still at the Surgical Center because his leg is still draining.  We are hopeful he will be ready to go to his foster family this coming Saturday.  He is walking on the leg and appears to be a very happy boy.  We have had no problems with him at all.  He is a laid back fella.

Here is our sweet boy Titan.  The wraps are finally off his back leg and it is not draining anymore.  He will be going into foster care to complete his rehab tomorrow.

Titan is with his new foster family and is doing great.  He is still a little uncomfortable with the fixatures but is so loving and kind he just wants his hugs and pats on the head. He is also being treated for an ear infection but is responding well.  he will be with his foster family for about three months until the fixatures can be removed.

This incredible boy is healing beautifully.  He does not like being in the cage all the time and rubs his chin on the cage all the time to get out.  We ahve started keeping the cage door open so he can get out a little and then go back in.  He is not allowed to run around at all with the fixatures in his leg and that is frustrating to him.  He is a big love and shakes his rear end every chance he gets when he is is happy to see someone.

Titan has finally had all of her fixatures removed and the brace on his leg.  He is now ready to go to some lucky family that will just pamper him with lots of love and affection.