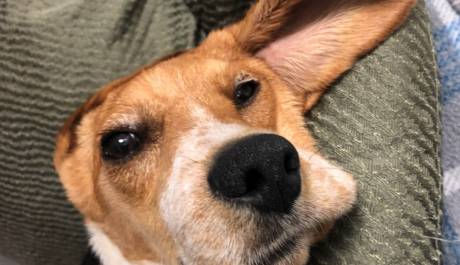 Sweet Barney has had a setback and is in ICU.  He spiked a fever yesterday around 105, and it has remained around 104 with extensive IV fluids.  It is not uncommon for an animal that has had extensive surgery to have an inflammatory response that can bring on a fever.  His Medical Team has changed his antibiotics and will be following him closely.

This special puppy is pretty laid back in general, but now he feels rotten and wants to lay down and sleep.  The good news is he still has his appetite and is taking in enough food and water.  We thought the fever would have broken during the night and was surprised to hear it was still elevated this morning.  We are cautiously optimistic it will break by this afternoon.  The good news is it was caught in time before it went any higher.

Barney loves attention anyway so 24-hour care in ICU is right up his alley.  He gets smooches and rubs throughout the day and night.  We will do another update as soon as he is stable.  Say some prayers for this adorable little puppy that he can fight whatever is going on in his body.