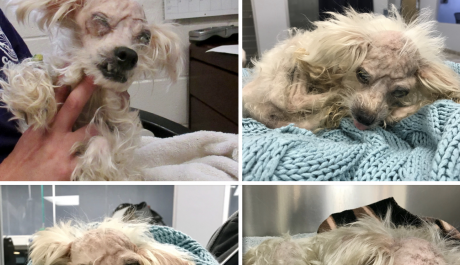 FAYETTEVILLE, NC.....We got a desperate plea to help an emaciated 10-year-old poodle on Wednesday from Animal Control at Cumberland County. They were notified of a poodle that appeared to have been abandoned in the backyard of a home.   No food or water was left to help this starving older dog. When the authorities were called, it was immediately reported as a criminal abuse case based on the condition of the older poodle we have named Blanche.

Once I saw Blanche's pictures, I begged for help to get her to our ER Specialists at CVRC (Charleston Veterinary Referral Center) in Charleston, SC.  There was no way she would survive if she wasn't at a Level 2 Critical Care facility. Angels were watching over this special pup because two Volunteers stepped up to bring her to CVRC.

A Team of ER Specialists were ready when sweet Blanche arrived. The first thing they noticed was that Blanche had a tough time walking because of the pain in her lower spine.  Part of her condition was because she was starved and emaciated, but she apparently had issues with her lower back.  The other main concern was she was very anemic which they believe is from the flea infestation she had.

Her bloodwork showed that she had regenerative anemia which meant once we got rid of the parasites, her blood might improve.  If she does not improve later today, she will have to have a blood transfusion.   Poor Blanche has a lot of Medical Issues because she has been starved.   Her organs had begun to shut down, and now we have to wake them up gently, so she does not get Refeeding-Syndrome which would be fatal.

How this tiny 4-pound dog has survived in her condition is a testament to her Will to Live.  We do not know how long she has been abandoned or how her back became injured. Abandoned dogs are targets for strangers and kids to abuse.  The authorities are doing everything possible to find the people that used to live at this home and left her behind.

There are still a lot of unknowns about Blanche, but one thing is for sure, this pup waited for someone to come and save her.  She did not give up and did everything she could to survive this horrendous abuse and neglect.   Blanche was right.  Hope was on it's way to her.  If there was ever a dog that had Angels looking out for her, it was this pup.   By all accounts, she should have died long before she was found.

I want to be very clear about what we are doing Medically with Blanche.  We are not keeping her alive.  We are treating her Medical Conditions as we find them.  Some of her Medical Issues cannot be addressed until she is stable. Blanche can give up at any time, and she will DIE.   We are not going to intervene if she goes into respiratory distress unless she is in pain and we will ease her suffering.

Our top priority is  Quality of Life.   We are giving her body what she needs to compensate after being starved nearly to death. Blanche is fully aware of what is going on and curls right up into your arms for Love and Affection.  Her eyes are a mess but have been treated so she can see the people that are working with her.   She will see an Optomologist when she is stable.

Blanche is in CriticaI Care /  ICU and will remain there until she is stable.  She is being loved and nurtured 24 hours a day.    Right now, all she wants to do is rest and eat which is precisely what we want.

We need all the Donations we can get for this precious pup.  ICU is one of the most expensive places to be in a hospital, and Blanche is going to be there for a while.   Please, Donate whatever you can so we give Blanche the Medical Care she needs to Survive the abuse she has endured.