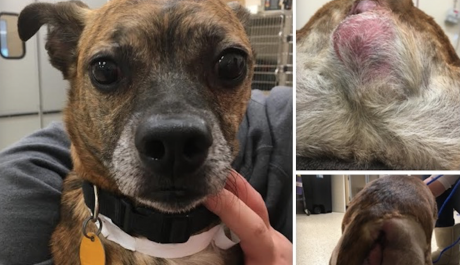 Your donation will help DUKE recover.

JACKSONVILLE, ARKANSAS.....We were contacted a week ago concerning a tiny Pitbull Mix that had a massive Anal Sac Tumor.  The dog was eight years old, and the Family had the pup since he was a baby.  In October, they contacted their Vet in the area to get help with a mass they found on his rear end.   The Vet did not think it could be removed and recommended steroids.   The Family went from one Vet to another to get help and were told each time, nothing could be done.  During this time, the tumor grew from a golf ball size mass to the size of a small grapefruit. Duke was healthy in every other way. He was not showing any signs of straining when going to the bathroom but it was just a matter of time before his bowels became blocked.  The Family did not have money for extensive surgery but were willing to do anything to save their sweet pup.   Their dogs were their Life and their Children.   They would eat before the Family ate.

They saw the post on Nickel and how the tumor had burst, and it horrified them.  They got an x-ray done to see if the tumor had spread to the lungs and it had not.   We were contacted after they saw the post on  Nickel.    I finally broke down and agreed to help if they could get their dog to our Specialists in Charlotte, NC.   They did not even have gas money and were waiting to be paid and then they would get on the road.  I wired gas money to them, so the tumor did not have time to grow any bigger.  It was now or never for this sweet dog.  They drove all through the day and night in the worst weather imaginable to get Duke to Charlotte.   He arrived yesterday morning around 7:00 AM.

Our wonderful Surgeon, Dr. Michelle Nanfelt at Carolina Veterinary Specialist, could not believe her eyes when she say the dog and the tumor.  What you see externally is only a part of the tumor.  The mass is centered around the right anal sac and dives deep into the pelvic canal.   Duke only had about a month left before he would have to be put down.   We finally were able to get across to the Family how desperate Duke's situation was.  He either had surgery to remove the mass and follow-up with either radiation or chemo based on the kind of tumor he had or they needed to prepare to say good-bye to him soon.

Late yesterday, during the terrible ice and snow storm in Matthew, NC, Dr. Nanfelt had her own storm going on in surgery.  The mass was even bigger than she had imagined.  Duke was in surgery for hours.  We were not sure if he was going to survive or not.   We finally got the call we had been waiting on; Duke made it through surgery and Dr. Nanfelt got the bulk of the tumor out without destroying anal tone on the left side.  He is still not out of the woods, but the worst is over.  We now just have to wait for the biopsy to come back to determine the type of cancer he has.

This past month has been stressful beyond anything you could ever imagine.  We are so busy saving animals that we don't even have time to tell you about them or raise funds.  Please, DONATE toward this Family's dog.  They had to sign him over to us so we could make the medical decisions but he will be going back to them.  They are a good Family that did all they could to save their beloved Duke including reaching out to us in desperation.