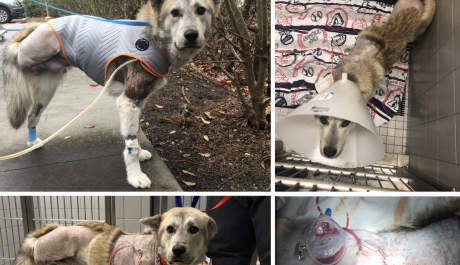 I am happy to report we finally got this amazing dog stable so we could remove his rear leg.  This sweet pup had so many issues with the infection draining on his front leg that we could not address the rear leg.  The other issues were his blood was not regenerating, which was an even bigger issue that prevented us from doing more surgery.

The minute Ghost's blood began to show improvement, and his bloodwork began to show positive results, Dr. Seibert took him into surgery to remove his rear leg.   The operation was done as quickly as possible, so there was not a lot of blood loss, and we could get him back in recovery.  Ghost was a little colder than they wanted during the procedure, so he had to remain in Recovery a lot longer than they had initially planned.

The other issue is Ghost is what I call a "Cheap Date," he cannot handle drugs very well and was loopy for the next two days.  Once he began to recover and came out of his fog, he got right up and began to walk as a tripod without any issues.   We were able to remove the wound vacuum over his right scapula and surgically close the large wound five days after his amputation.  We had to leave a drain in the surgical site so he did not develop a seroma from the excess fluid.

Overall, our sweet boy is doing well.  His wounds have a lot of healing to do, but we are getting the best possible outcome with all of his injuries.  We have to do more bloodwork and monitor his blood values over the next month, but it appears (albeit slowly) his blood has begun to regenerate.

Ghost is the sweetest, most affectionate dog.  He loves everyone he meets.  He gets a little nervous at first with other dogs and soon warms up when he realizes no one is going to hurt him.  The way he is getting around as a tripod now, he will be running and playing in no time.

Thanks for helping us with beautiful Ghost.  He is a fabulous dog that anyone would love to have join their Family.