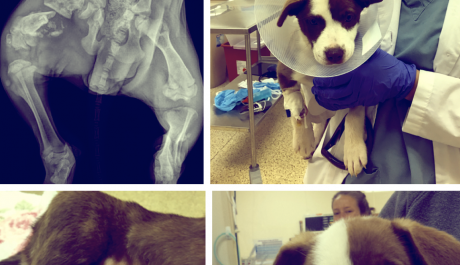 YORK, SC.....Adorable Harper Lee came to us as a puppy a couple of months ago.  It was during the time that our web site was down, and we had to post everything on Facebook just to keep you informed.  I had posted this sweet pup, but her information would never come up on our website.  There was a bug that would not allow me to enter in his information again since she had already been entered.   Well, I am happy to say, I can now let you know about this wonderful little girl that steals our hearts daily.

Harper Lee was brought to our attention when her Owner Surrendered her to York County.  The Owner originally acting like she did not know what happened and then finally admitted Harper Lee had been hit by a car.   Based on her x-rays, she had been run over.   One of her poor rear legs was broken in several places.  I cannot even begin to imagine the pain she had been in for several weeks without any medical care.

Once I saw the x-ray, I immediately said we would take her.  This adorable 16-week old puppy with a mangled limb did not stand a chance of being saved if healthy dogs were being put to sleep all around her.  Harper Lee was taken to Carolina Veterinary Specialists where she was evaluated.   Surgery could not be done until she was stabilized.  She was loaded with every parasite known to man and was anemic.   Harper Lee spent the next week in the hospital getting stable and then Dr. Michelle Nanfelt did her surgery.

Our plan, in the beginning, was to plate the leg.  Once Dr. Nanfelt got Harper Lee into surgery, she soon realized the broken leg was too far gone to save.  Scar tissue had already formed, and the leg was now pretty well set in a very deformed position that was no longer usable.   We discussed re-breaking the leg to set it straight but decided recovery was going to be too traumatic for this little puppy.   The most humane thing for us to do was to amputate the mangled limb.

Our little girl was so glad to have the leg off that she did not miss a beat once she came out of recovery.   It was like she finally got rid of her source of pain and now she could get back to running and playing.   Harper Lee has not stopped running and playing since then.  She is one of the cutest little pitties you will ever meet.   She has a big pittie personality in a tiny stocky body and is adorable.  We have posted some adorable videos to show you how well she is doing since her surgery.    Please, take the time to look at them and SMILE.

Please, Help us with her Medical Bills so we can help more puppies like Harper Lee get the medical care they need when they are abused and neglected.