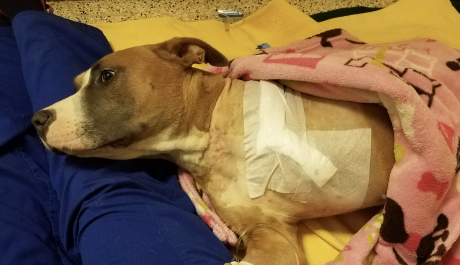 Help Is, Help Her!

Our sweet girl has had a rough couple of weeks but is finally getting some much-needed relief.  Maybelline's front leg was diagnosed with  Brachial Plexus Avulsion.  The most common cause of brachial plexus avulsion is vehicular trauma which Maybelline had. This type of trauma results in significant pulling on the forelimb, resulting in overstretching of the armpit/shoulder area.  In Maybelline's case, all of the nerves connected to her spinal cord that control the movement of the leg were no longer connected. The excessive swelling she experienced was from the damage that was done when the leg was pulled away from the shoulder area.

Maybelline's leg was suddenly an appendage and not a functioning leg. Imagine having a leg hanging down in front of you that is longer than your body that you cannot control.  It hangs there, and you have to get around it to walk, but you cannot get it out of the way.  We had no choice but to remove Maybelline's leg to give her back her life.

We got a lot of messages from people that were bothered that we were going to remove this poor girl's leg.  The fact is, Maybelline no longer had a front left functioning leg and never would.  We had to focus on doing everything possible to get this special pup walking again.  We did the surgical repair with two plates on her rear left leg to give her back some stability.   It took her a couple of days to recover from these procedures, but she finally started to use the rear leg.

We went in on Thursday and removed her damaged front leg. Maybelline spent the weekend in ICU recovering from her amputation.  I am happy to report that she is up and now walking around.  She no longer has a ball and chain for a leg holding her back.   With the damaged front leg out of the way, she can balance and walk on three legs.  As you can see from the pictures, she is happy and rolling around on the grass in delight.

The fact she can walk is a Miracle.  When she arrived, there was a good chance she was never going to be able to walk without a custom cart because of the massive injuries on her left side.  We got all of the Specialists together and came up with a concrete plan that would give her back her Life.  We went down the list and did every procedure they recommended.   It worked, and our beautiful young pup can now move on to Healing and Loving Life.

Maybelline will be coming to our Rehab Facility this week to start her Physical Therapy and be showered with more love than she could ever imagine.  She had three major surgeries to get her walking that were each very expensive.  One surgical procedure is bad enough for any Rescue, but three for one dog is a Deal Breaker.   We didn't give up or give in to the mounting bills.  We stayed the Course, and the Results proved we did the right thing for this young pup.

With all the pain and Suffering Maybelline has endured, she has never once done anything but shower everyone with tons of kisses.  She is one of the sweetest pups that loves everyone she meets. She is going to make a fabulous member of the Family for anyone that is looking for a new pup to shower with Love.  Please, drop us a note if you think she would be right for your Family.   In the meantime, her bills have to be paid so we can move on to saving the next Abused and Abandoned pup that is scheduled to be euthanized.

Thanks for caring and giving Maybelline her Life back.  Your generosity is seen every day in the faces of the pups we Rescue.