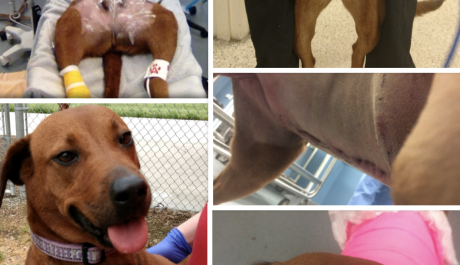 Your donation will help THELMA recover.

DEKALB, GA......Sweet Thelma is a 5-year-old Terrier Mix that was picked up as a stray in Dekalb County, GA with another dog.  They were picked up in February, and the other dog was adopted, but sweet Thelma was not because of her condition.   She was very lethargic when she arrived, emaciated and had mammary gland tumors.   The Shelter loved Thelma and did everything they could for her but could not do anything further for her tumors.  They searched for someone to take her into their Hospice Program, and when no one stepped up, they reached out to us as a Last Resort before they put her to sleep.

I got all of Thelma's Records and sent them to our Surgeons and Specialists in Matthews, NC.   I decided we could do better than Hospice for Thelma and work on removing her tumors.  Her chest x-rays showed the cancer had not spread and her vitals were great.  We decided to get her to our Specialists in Charlotte, NC to see what we could do to give this amazing dog her Life back.

Thelma was worked up from one end to the other.  She was Heartworm positive, so we had to have our Cardiologist do a full work-up to make sure she could be sedated for surgery.   She was stable enough for surgery but would have to be treated for the heartworms once she had healed.  They went ahead and started her on the Doxycycline Heartworm Society protocol so she could have her injections in a couple of months.

Sweet does not even begin to describe the amazing personality Thelma has.  She is a very special pup that we were committed to saving.  The only way to give her the best chance possible was to remove both of her mammary chains and then to do a skin graft to cover the areas that no long had enough skin to close.   This is hard surgery for any animal.  Removing the tumors is not the hard part but keeping the area from being too tight and the cuts remaining closed is the hard part.  Lots of tiny cuts were also made in the skin that would allow it to stretch and fill in to ease the tightness.

Thelma has several weeks of ICU while her skin grafts take and her body responds to the drastic change.  The good news is that her biopsy came back with clean margins.  All of the cancer was removed when they did the procedure.  We now have to give Thelma's body time to adapt and heal.

Please, keep this special girl in your prayers.  We do so many of these procedures that I think a lot of people forget how complicated the surgery and recovery is.  Thelma will remain in ICU during her recovery.   She has a lot of bills from her surgery and ICU.  Please, DONATE whatever you can so we can get her well.  Once she has recovered, she will have a thorough evaluation from her Oncologist to make sure we have covered all of our bases to give her the best possible chance of living a long Life.   Thanks for caring and making her Journey to Heal and find Love, possible.