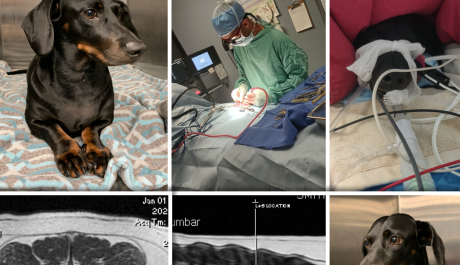 BEAUFORT, SC...Sweet Woody is a 3-4-year-old Dachshund that was an owner surrender.   We were contacted late yesterday evening about a dog that had been surrendered and was at the vet unable to walk.   He had a little bit of deep-pain but not a lot.  Given he is a Dachshund, it was assumed he had IVDD, which is common in this breed.

Between each vertebra is an intervertebral disc, designed to provide a cushion between the vertebrae.  The animal can develop a ruptured, slipped, or herniated disk that suddenly puts pressure on the spinal cord.   The animal suddenly becomes painful and quits using rear legs.  If the problem is not addressed quickly, damage to the spinal cord could be irreversible.  The dog could lose the ability to walk and go to the bathroom.

The Owner was not up-front about what had happened or when he began to lose his ability to walk.   The best we can determine is that it has been over a week.  Woody was stable during his procedure and is resting comfortably.  He has a urinary catheter in since he cannot urinate on his own at this time.  We are hopeful he will get sensation back since the ruptured disk has been removed and is off his spinal cord.    We will know more in the next four days what his long-term prognosis will be.

Woody's other option was to euthanize him, which I did not want to do.   Woody is young, and his chances of having a great Life even if he cannot move his rear legs is promising.  We see Miracles every day with Archer, Tibby, and all the others.   Please, Donate toward this special pup so he can get the Gift of Life. 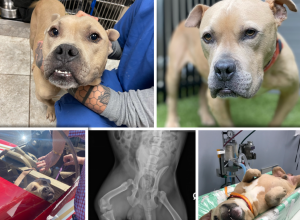 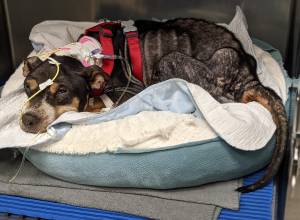