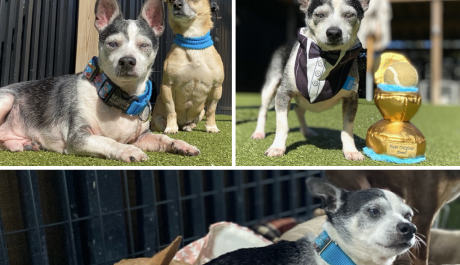 We have been working tirelessly to do everything we can to relieve the pain Buck has from his dry eyes.  The biggest problem is his eyes hurt so badly that he does not want anyone to put the medications in his eyes. Even when we get the medicine in, it does not appear to give him any relief.  I hate to think about how much pain he would be in without the medication.

Watching Buck has opened my eyes to how many dogs suffer from this infliction.   It is cruel not to do everything possible to relieve their suffering.  We guess Buck's age to be around ten years old.  Over the past two months, this sweet boy (when not putting drops in his eyes) has stolen the hearts of everyone here.  He acts much younger than we initially thought and loves everyone.

Buck's eyes are the only medical issue he has.  We had cleared up his skin issues and anything else that was wrong with him when he arrived, except his eyes.  On a good day, he has 50% sight.  On a bad day, he is lucky to have 20% sight all because of the scarring on his eyes.  I have spoken to lots of Optometrists, and Dr. Anne Cook is always my go-to Eye Specialists.  I have even discussed removing his eyes to stop the pain.

During these discussions with Dr. Cook, I have discovered a procedure called  Parotid Duct Transposition. PDT is a Surgical technique to move the papilla and parotid duct from the mouth to the inferior conjunctival cul de sac of the eye.   The procedure provides lubrication to the eye in cases of refractory keratoconjunctivitis sicca (KCS), which Buck has.

The procedure is several thousand dollars per eye, and Buck needs both eyes done.   After much thought and spending lots of time with Buck, I have decided to give Buck the only chance he will have of restoring his eyesight.   Without the surgery, we will have to either put him down or remove his eyes to ease his suffering.  Putting Buck down is not an option for me.  We have each been bitten dealing with his eyes but are willing to do whatever it takes to give him relief.

This morning, Buck is on his way to have the Parotid Duct Transposition Surgery with Dr. Anne Cook.  PDA is a first for us, but it is a surgery that has been around for a while.  It has pros and cons but is the only option for Buck since he is not comfortable with medical therapy alone.  The surgery is costly.  Please, DONATE for Buck to get his sight restored with this procedure and pray it works. 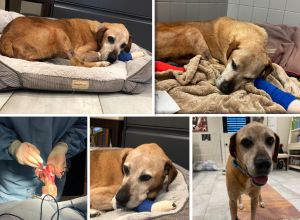