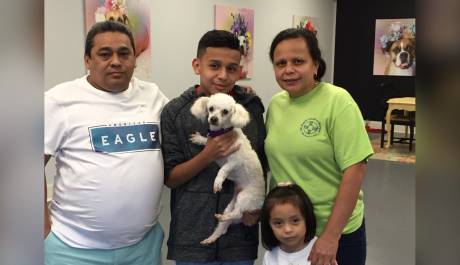 Help us, Help Her!

HARDEEVILLE, SC......Sweet Elsie is an older Poodle Mix that we believe is around 8-10 years old.   She was picked up in the middle of the road by a Good-Samaritan dragging a large abdominal mass on the ground.   With no place for her to go, we were contacted and agreed to take her into our Medical program.   She was brought to Charleston Veterinary Referral Center in Charleston, SC where she was thoroughly evaluated.

To say little Elsie was a hot mess is an understatement.   She had a large mammary mass that had ruptured and was in horrible shape. Her Good-Samaritan took her home for the night, gave her a bath and food and then brought her to the hospital in the early morning hours.  Elsie was in a lot of pain and dehydrated when she arrived.  She was also in no mood to be messed with since her fur was matted all over her body.

Dr. Kristin Welch was Elsie's Critical Care Specialists that was over-seeing her care.   Once we determined all that was wrong with this sweet older gal, we then came up with a plan for Elsie that would give her the best possible outcome.

Elsie has several mammary masses that have invaded other areas of her body.  She has a mottled spleen with hypoechoic nodules, and her duodenum and jejunum showed abnormalities along with her uterus and cervix.   Endoscopies with biopsies were performed.  I decided that removing all of her mammary chains would be too invasive for Elsie, so I opted to do the surgeries in stages.  We knew Elsie probably had cancer and I wanted to remove the large mass that was causing her the most discomfort first.

Our sweet girl did amazing during her procedures.  Dr. Rachel Seibert did her surgeries and was prepared to close her up at any point that she showed any signs of distress. We were prepared for the worst and gladly got the best possible outcome.  So far, all of Elsie's results have come back benign adenoma with clean margins.  All of her other results were an inflammatory response.

So many people put dogs down that look half as bad as Elsie. We did what was necessary to give her the best Quality of Life.   This wonderful dog has got her Life back.   She is still healing from the procedures but could care less.  She is no longer dragging around a large mass, and her bloodwork is finally beginning to stabilize.

We were prepared for Elsie to go into our Hospice Program and live out her final days with us.   Once we realized how Spunky and full of Life she was, we knew we had to do more to save her.   Elsie is one of the happiest pups.   We are still removing her mats, but each day she gets cuter and cuter.   We Love this big bundle of fur.   Over the next month, we will get a good idea of just how young she is.   The way she is acting, you would think she is only a couple of years old, but her teeth tell us a different story of abuse and neglect.

Elsie's Surgeries and Critical Care have taken a big bite out of our funds.  Please, Donate whatever you can so we can save more dogs like Elsie that have been forgotten and neglected.   Have a very blessed Holiday Season.