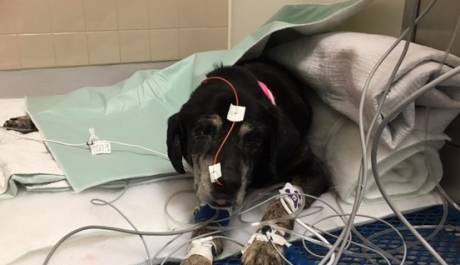 Help Us, Help Her

Your donation will help GRACE recover.

ATLANTA, GA......Yesterday was aq gut-wrenching day.   It seemed like every dog we had was having difficulties but the most pressing was a new pup named Grace (she came in with the name Rosita that we changed) that had arrived the day before and went into ICU immediately.   This beautiful pup was a 10-year-old lab we had offered to help that had a mass on her leg and also in her mouth.  By the time they had transported her to our Specialists in Matthew, NC, she was barely alive.   All of the Specialists were working on Grace to determine what was causing her distress.  A Cardiologist was brought in, an Echo was done, and we soon realized we had a dog with Caval Syndrome which is a life-threatening heartworm disease characterized by heavy worm burden which prevents normal blood flow through the right side of the heart. Without proper therapy, death can occur 1 to 2 days after onset of clinical signs which she had ben having for days already.

Dogs with Caval Syndrome (which is TOTALLY preventable when Heartworm preventative is given each month) suffer and die a horrible death.   No animal deserves to die this way ever, and it happens all the time.   The only way to save the dog is to have surgery to remove the heartworms and not all Cardiologist, or Hospitals are equipped for this surgical procedure.  Unfortunately, it could not be done at Carolina Veterinary Specialists where she was, and Rosita had to be transferred to NC State in Raleigh, NC or she was going to have to be put down.   I did not step up for this sweet pup to not give her the best chance possible, so I paid a Vet Tech to drive her to Raleigh so she could remain on her IV's and be closely monitored all along the way there.

Rosita was barely alive when she arrived and was taken back to the ER immediately.   I was contacted right after she arrived and was given the news that it was now or never for her.   It was going to be $6000. to do the heartworm extraction procedure and her chances were not good to survive the surgery, but it was her ONLY chance.   I decided to give her the medical care she needed to give her the best possible chance of surviving.  I told them to do the surgery and prayed she made it.   We have had cases much worse than Rosita with Caval Syndrome, and they are alive today living wonderful lives.

The surgery was only an hour long, and they were able to remove 15 worms.  Unfortunately, she was so anemic when she went in that after surgery, she required a Live Blood Transfusion which was another $1700.   By 11:00 PM, my head was spinning not knowing what was happening with her.  I finally got a call from her Cardiology Surgeon that she was doing much better and the Transfusion was lifting her Spirits.   She would be given the balance of the Transfusion during the remainder of the night.   If she became worse, I would get a phone call.   The good news is that I did not get a call and she was stable during the night.

I just got a message from her Cardiologist, and Grace's blood panels are coming up, and her blood pressure is finally in the normal range along with her breathing.   She is now in a sternal position which she has not been in since she arrived.    She is alert, aware of her surroundings and is comfortable which is amazing.  She is not out of the woods but is making progress and going in the right direction.    This sweet older gal needs all of our prayers.    As soon as she is stable, we will send a Vet Team to pick her up and bring her back to Carolina Veterinary Specialists where she will begin her Recovery in ICU there.

This has been a dreadful 24 hours.   I think I need to take up drinking.   My last nerve is shot after the stress of saving this sweet pup.   Life has NO Guarantees, but one thing is for sure, if Grace's Owners had given her the HW preventative, she would not be in this situation, and we would be focusing on the masses we originally brought her in for.

I feel like a broken record, so I want even say we need funds because you all know the situation we are in with these dogs.   Any help is greatly appreciated.

I will post an update on Grace as soon as I find out when she can be moved.   I will also be sending around updates later on Lucy, Willow and Delilah.  They are each doing well.    Thanks for being the Good in the World of Chaos that we live in.