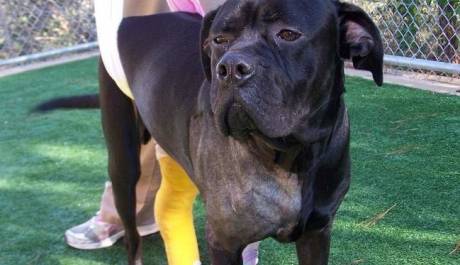 Your donation will help Hooch recover.

BAMBERG, SC............Sweet Hooch is a 4 year old beautiful Mastiff / Boxer Mix that was picked up as a stray emaciated with a leg injury.  He was taken to the Shelter in Bamberg where he stayed for quite a while not being given the time or medical care he needed to repair his leg. The Shelter staff had fallen in love with him and wanted him to get out.  He was never going to be adopted or ever get out the way he was.  We were contacted to please step up for him which we did.   Sweet does not even begin to describe this incredible dog.  He is one big goofy Love Bug.  It appears someone had him tied up with a rope or piece of wire around his leg.  The rope began to cut off the blood supply to the lower part of the leg and eventually the lower leg collapsed.  Hooch has to walk on the part of his leg that should be vertical that is now being used like a foot.  This wonderful dog could care less about any pain and suffering he has experienced.  All he cares about is that he is out of the Shelter and surrounded by people that think he hung the Moon.  We have had Hooch for almost a month doing rehab on the leg. We also had to rebuild the muscles in the other leg that had atrophied from lack of use to prepare him for surgery.   The surgeon has ordered a special plate and device to use on his leg when surgery is done.  He is now scheduled to have surgery on Tuesday.  He has waited patiently for this day to come and now we are hoping and praying this procedure works.  We do not want to amputate his leg and are doing everything possible to make sure that does not happen.  Our dear boy deserves a chance at a normal life filled with lots of love and compassion.  We are determined he is going to get it.  For the last month he has been showered with more love than he could have ever imagined possible.  At times, you can see him wondering how he got so lucky.

Sweet Hooch has finally had his surgery and is doing wonderful.  It will be six weeks before we will know if the surgery was able to repair the leg in a way that will allow it to be functional again.  Our dear boy has been the best patient.  He has not complained once.  He is by far one of the happiest dogs we have ever rescued.  He knows he was saved and has spent ever second since then loving on everyone to let us know how much he appreciates it.  How anyone could have allowed this to happen to such an incredible, loving dog is beyond me.

Our sweet boy Hooch is doing wonderful since his surgery.  We are feeling better and better that we are going to be able to save the leg.    Once this leg heals we can then address his other rear leg and do surgery on that one.  His other leg has a torn cruciate ligament that must be repaired before this sweet boy can be adopted.

Our dear boy Hooch had been doing so well with his recovery after his initial leg surgery.  It was now time for him to have surgery to repair his Cruciate Ligament on his other leg.  He went to the surgical center in Columbia, SC and was his normal sweet loving self until suddenly something went terribly wrong and he had a seizure.   It wasn’t a big seizure but was enough for us to immediately have him transported to the Critical Care facility in Charleston, SC.  Forget about the leg for the moment, we now had a major problem that could kill our sweet boy. A Neurologist was called in and and a thorough Neurological examination was done.  We, along with the Neurologist thought this was just a random circumstance.  To play it safe, we thought it was best to do an MRI and rule out any problems.  We were shocked to see our sweet Hooch’s Brain light up like a Christmas Tree on the MRI.  His brain was inflamed for some unknown reason.  The doctors immediately did a Spinal Tap to see what we were dealing with.  The results came back that sweet Hooch had Encephalitis from an unknown source.  His white blood count was not high enough for this to be from an infection.  He was started on steroids to get the swelling down and an antibiotic.  He is still in the hospital and will be until we feel like the swelling is improving.  He and Freckles are now hospital mates.  For Hooch to have this much damage he had to have had seizures before.  We have not witnessed any and someone is with the dogs all the time including nighttime.  The best we can come up with is that Hooch had been in a shelter where he had very little contact with anyone.  He literally had been abandoned to an area where no one went.  That was one of the main reasons why we were asked to step up for him so he could get the care he needed and could get out.  He must had been having seizures during this time and no one was around to notice.  The thought of this makes me so sad for this wonderful dog.  Hooch is a sweetheart that loves people and craves the warm embrace of human contact.  Once we got him, his care became a top priority.  The best we can determine is that the care he was getting prevented him from having the seizures but it was just a matter of time before he would have one.  Thankfully, he was under our care at the time.  Hooch is not showing any other neurological systems.  If the doctor’s hadn’t witnessed the seizure, we would not have known he was not our perfect sweet boy.  Keep Hooch in your prayers that we can turn this around for him.  We finally got him on the mend only to find out our sweet boy had other issues that needed to be addressed.

Thanks for helping us with this incredible dog.  He has not had a seizure since he had the initial one that was documented.  Because his brain MRI showed significant changes, he is on steroids to get rid of the inflammation.  The problems with the steroids which cannot be avoided is that he will probably tear her other cruciate ligament.  We are prepared for that to happen but are giving him wonderful supplements to prevent as much damage as we possibly can.  He will also be on limited walking to prevent more injuries to his joints and ligaments.  In 6 weeks, we will do another MRI to see if the inflammation is down.  If it is, then we can proceed with his surgery.  Thanks for caring about this dear boy.  He is the sweetest boy that has a had a terrible life up until now.  We love his wonderful, gentle ways.