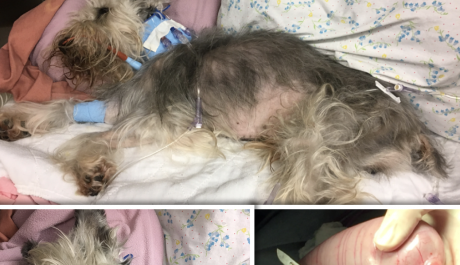 BEAUFORT, SC.......This weekend has been a Nightmare dealing with Major Abuse cases.   I will never understand people that abuse innocent little pups.  I will post for those animals later in the week once they have arrived the hospital and become stable but for now, we have a different kind of story.

On the opposite end of the pendulum are people that would do anything in their power to save their beloved Family member.  Sweet KC is one of those cases.  I got a phone call from someone that knew what I did and was trying to get help for her co-workers 10-year-old Mini-Schnauzer named KC.  I heard the story and then explained we only do major Medical Abuse Cases.  I asked if he had seen a Vet and what the Vets had said and offered guidance.

I then decided to talk to the Owner of the dog, and she said she would sign the dog over to save him or at least give him a chance.  She had seen several Vets and had also taken him to the ER, and she did not have the funds that were needed to save her dog.  I listened to her plea and suddenly realized, if I did nothing, this sweet dog would probably die a horrible death over the next two days.  KC had a Bowel Obstruction, and nothing was going through his system.

I contacted Charleston Veterinary Referral Center where KC had been taken and spoke to one of the Specialists to get a better understanding of exactly what was going on with KC.  By the end of the conversation, I knew this poor dog was soon going to become septic from his bowel rupturing, and I would not be able to save him.  The Owner signed KC over to us so I could make the necessary Medical decisions to do everything possible to save him.

KC'S situation was grave at best.  I had him taken to CVRC immediately to see what could be done.  We did every test imaginable to figure out exactly where the obstruction was to see if we could clear it.  Sadly, nothing was working, and we had to put a Naso-Gastric tube in and closely monitor for signs of distress.  He was diagnosed with a stricture at the junction of the jejunum and ileum (the 2nd and 3rd segments of the jejunum). This created an obstruction or blockage preventing food material from passing.   KC had been fed pork bones which were becoming lodged prior to this stricture and contributing to the obstruction.

KC became clinical yesterday and had to have emergency surgery to clear the blockage.  We posted a picture so you could see how badly swollen the area was before the blockage.  We don't know what caused the stricture.  We have taken several samples that have been sent off for biopsies to be done.  KC is still critical and is in ICU.

Please, Help Us, Help this sweet pup by Donating.  The Owner was willing to sign him over so he could be saved.  Now let's save them both.  Warm hugs....Jennifer