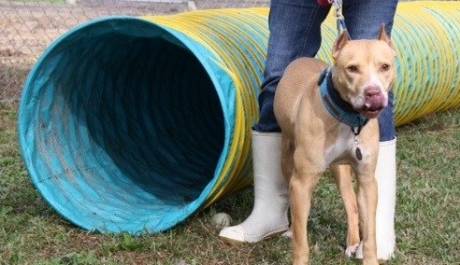 Your donation will help Mya recover.

MONTICELLO, GA......Sweet MYA is a 4 year old Pitbull that has had a horrible life.  She was thrown off the back of a truck on a country road after being used to fight.  Her injuries indicate to us, she was used as a bait dog for fighting.  Another rescue was contacted by the people that went to help her.  She was not  an animal they could help because of her extensive medical needs and we were contacted.  To say that MYA has issues and lots of medical needs is a big understatement.    When she arrived she was covered with ticks, bleeding and had lots of new and old wounds.  She is a beautiful muscular dog that has perfect form for a male.  The problem is that she is not a female or a male, she is both.  She is a Hermaphrodite which is an animal that has both set of genitals.  Usually the animal is more one than the another.  MYA has a full set of all for both.  Her body seems to be more male than female based on the muscles she has.  We suspect she was discarded when they tried to mate her and discovered she could not be mated.  As if that is not enough, she has Entropian eyelids, which are very painful.  Entropian is a condition in which the eyelid turns inward instead of out causing the eyes to always be irritated,  inflamed and infected.  She will have to have surgery to correct her eye condition and her genitals. She is a sweet dog that is not really sure how to act based on the different hormones she has running through her body at the same time.  When we perform the surgery, we are going to attempt to make her a him.    Doing the opposite is a lot more complicated based on the urinary tract issues.  I feel terrible for this sweet dog.  Not only have people been abusing her but her body has also.  She loves being cuddled and loved on.  She is a sweetheart of a dog.  Once she is well, she will have to go to a trainer to be re-socialized with other animals based on her past experiences.  When all is done, he will make a loyal loving companion to some lucky person.

UPDATE on MYA.......Her case was not a typical sex change because she had all of the parts to be either. The main issue we were forced to deal with is her urinary tract function. I say she because she was neutered and spayed and once that is done she becomes more of a she than a he. All of the surgery was done internally because we opted to keep her urinary function the way it was. It may not look optimal but it is the best outcome for this sweet girl. MYA has male and female genitals. Her male genital was developed inside her female genital and that is how she urinates. To have moved that forward would have been too risky for something that is aesthetic only. All we care about is correcting something that is causing her medical issues and that we have done. She doesn't know any different and we don't care how she looks as long as she is functional. What appeared to be entropic eyes when we received her, were eyes that had been infected for so long that the eyes were swollen in such a way that her eyelashes went into her eyeballs. Her eyes are almost clear and beautiful and any lashes that were a problem have been removed. MYA is a beautiful specimen of a dog that loves people. She has issues with other dogs because she was used for fighting and is still very fearful of them. Her issues are out of fear and not out of the drive to fight. She will have to be re-trained and socialized with dogs that are secure enough to not be intimidated by her. She is a sweetheart of a dog. The love she shows everyone she meets will melt your heart.

Beautiful MYA has become wonderful at working with our tunnels and obstacles.  All of the dogs get to train and play with the swings, tunnels, etc.  Miss Mya has put them all to shame.  She is now ready for her new home.

She needs to be around submissive dogs only because of her history.  We love this incredible girl.  I have never seen a more beautiful dog than MYA.  She is a big bundle of love.  She is Queen of the Agility Course we have set up.