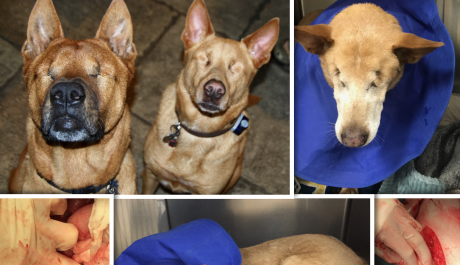 Three weeks ago, I lost my special boy Gus, I had rescued from Los Angeles nine years ago.  His Owner had died, and no one wanted him since he did not have eyes.   He was scheduled to be euthanized.  Gus was saved because so many people thought he looked like Sammy, which I had rescued ten years ago. Teenagers had tortured Sammy and destroyed his eyes on New Year's Eve.

Sammy and Gus moved right in with my five other dogs and soon ruled the roost.    Both dogs have been in excellent shape for their age.  About four weeks ago, Gus stopped eating, had some stomach upset, and had difficulty moving around.   I took him to the vet, did bloodwork and x-rays.  Bloodwork was perfect, but they did find a small diaphragmatic hernia which he might have been born with.

I had x-rays sent to CVRC and after consulting with them, decided to bring him to CVRC to have the hernia repaired.  Gus's Spirits were great, and he was back to his usual goofy self.   I dropped him off for Dr. Rachel Seibert to do surgery later in the day after his Cardiologist had checked him out for the procedure.  I went home and waited for the call saying he was out of surgery and doing great.

I waited and waited and waited until the call finally came.   Gus was still in Surgery.   When Dr. Seibert opened him up, he had advanced Stomach Cancer, and there was nothing they could do.  She did the minor repair and took a biopsy and closed him up.  My Special Big Boy, never got to come home.  Once his body realized he was sick, he never came out of it.  I had to say Good-Bye to him three days later.

It took me two weeks to recover from the loss.   I was so blind-sided by the fact Gus had advanced stomach cancer that I lined up each of my older dogs to have x-rays done over their entire body.   I wanted to rule out any growths or abnormalities that could not be seen with a naked eye.   Liza Jane and Sammy were the oldest, so they were the ones I took in.  Both dogs were in excellent health.  Sammy, at twelve years old, could still go out and walk five miles.  He was in the best of health and always had been.

Liza Jane, my Lab was free of growths other than a few lipomas we were watching and was free to go home. Sammy was not so lucky.  The radiologist found a significant growth hanging off his sternum.  An aspirate was done by Dr. Kerry Rissetto, our Oncologist that showed lots of blood and came back a sarcoma.  It was late in the day, so I took Sammy home to process everything we had found.  Sammy was way too healthy to have cancer.  There had to be a mistake.

I scheduled a Cat Scan to get a better picture of what Sammy had and to see if there was anything else the x-rays had missed.  Sammy did have a tumor that was hanging by a tiny blood vessel coming from his sternum.   Both the Surgeon and Oncologist were utterly baffled.  The other finding was there was a growth that looked like a testicle that had not dropped.

I waited a week to have him thoroughly evaluated and scheduled surgery.   This time, I did not drop Sammy off but waited for seven long hours for his surgery to be done and for him to recover from anesthesia.  Dr. Seibert came out after the procedure to let me know her findings.   Nothing was what they had expected when she went in.  The growth was wrapped around a large hematoma which explains all the blood from the aspirate.  The area was covered in scar tissue from trauma.  What they believed was a testicle was another hematoma.

Sammy was a Rock Star during the procedure and is recovering well.  He has staples going all the way from his groin to his upper chest. We have been cautiously optimistic while waiting for the biopsy results to come in.   Sammy's growth came by a rare Hemangiosarcoma.   His Oncologist and Surgeon are only giving him a couple of months.  I am giving Sammy much longer.   Sammy does not realize he is sick and is recovering well from his procedure.

I will probably not do chemotherapy since Dr. Rissetto does not think it would give him any longer.  I am doing a holistic protocol, and he is on a raw low-glycemic-index Diet.    Losing Gus was traumatic.   If I knew he had Stomach Cancer, I would have never opened him up.   Knowing Sammy had the tumor we removed will probably give him months we would have never gotten.    A lot of people choose not to know, but I wanted to know to give my pups the best Quality of Life and not have them suffer.

Gus's passing has probably saved Sammy from having a horrifying Death.   Our hope now is to give him the best Life with the time he has left and hopes it will be a long one.  Please, Donate whatever you can to cover these tremendous procedures.   We didn't get the outcome we wanted, but we did save Gus and Sammy from a Lifetime of suffering.  Gus was eleven years old when he passed.  He and Sammy have had a beautiful Life surrounded by people that have loved and adored them, unconditionally.

Tonight when you look up at the Night Sky, look for the most Majestic Cluster of Stars.  That will be my beautiful big Red Gus.  He will not be moving fast but will be holding his head very tall and proud.   He is finally Home. 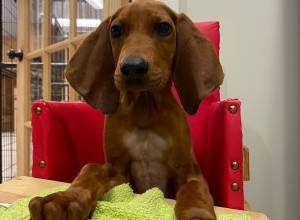