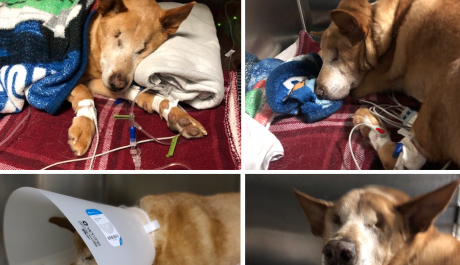 The last three months have been traumatic on so many levels that it is hard to define any one moment that stands out more than taking a beloved pet to the Vet and not being able to be with them after surgery.  The only time you can be with your animal now is if you are saying good-bye, forever.   It is heartbreaking on so many levels but necessary to keep the Medical Staff safe and healthy so they can be there when we need them the most.

My dear Sammy took a turn for the worse a couple of weeks ago and had to have emergency surgery.  He had not shown any signs of the cancer returning, and his chest x-rays had been unremarkable since his surgery six months ago.  He felt great and was loving Life until suddenly he wasn't. Sammy was diagnosed with Hemangiosarcoma.  His tumor was discovered during a random x-ray.

Dogs rarely show symptoms of Hemangiosarcoma until after the tumor ruptures, causing extensive bleeding.  Sammy had not been sick when we discovered the tumor.   He recovered beautifully and was healthy as an Ox until he wasn't.  He became lethargic, and his gums were pale.  My husband and I rushed him to CVRC, where they met us outside and immediately took him back.   We waited for hours in the parking lot with everyone else.  Hours seemed like days.

We finally got news from his Oncologist, Dr. Rissetto, that Sammy's cancer had come back with a vengeance.  She had consulted with Sammy's original surgeon, Dr. Seibert, and they both agreed Sammy needed emergency surgery ASAP.  The tumors had begun bleeding (which is what Hemangiosarcoma's do), and he also required a significant transfusion before he had surgery.

I got to see Sammy one last time in the parking lot before they began the transfusion and then surgery.  It was heartbreaking not to be able to be with him when he came out of surgery.  The procedure was lengthy, but he did well under the circumstances.  Dr. Seibert removed Sammy's spleen and also identified more tumors in his stomach, which could not be removed.

After several days in the hospital, our extraordinary boy bounced back and has been home with us recovering.  He did much better after this operation than he did the previous one.   Sammy went from Stage 1 Cancer to Stage 3 in the blink of an eye.    After a lengthy discussion with his Oncologist, I opted not to give Sammy Chemo.  He does not do well with drugs, and I knew he would be sick.   I have been doing a Holistic Protocol of Yunnan Baiyao for the bleeding, I'm Yunnity (which is a mushroom formula) and a Low-Glycemic diet which he was already on.

Sammy bounced back with a few rough days in between. In the end, Hemangiosarcoma always wins.    Sammy is still doing well and loving all the special treats he gets to take with his herbs.  I do not have a clue how long he has and am embracing every second I have with him as a Gift.

I often forget how old Sammy is because he always acts so much younger than his age.   He was rescued in 2009 and was 2-3 years old when we got him.  Our dear boy is between 13-14 years old.  Every dog should be a little slower at this age, and a blind dog should be a lot slower. I would say Sammy is a Super-Hero since he functions better than most dogs his age.  I am always Hopeful when it comes to each pup we save.   Hope still lives in Sammy.

No matter what happens to us, the World keeps moving forward.  Life is different but is still magical and wondrous in every way.   I do not like to see any animal suffer and do everything possible to prevent it.   I can't stop Sammy's cancer from growing, but I can embrace the Magic of Sammy and all the others we have facing the same outcome.  Life begins and ends when we accept what we cannot change and surrender to the Moment we are in.

Any support to help with Sammy surgeries and Medical Treatments would be greatly appreciated at this difficult time.  Warm Hugs and much Love from everyone at Noah's Arks Rescue.