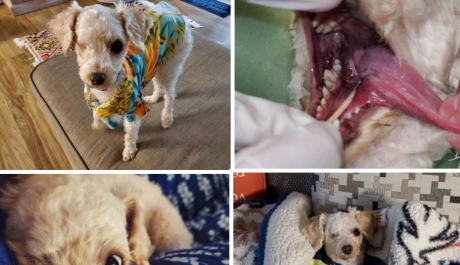 Sometimes, no matter what we do to get an animal, the Medical and Surgical Care they need, it still does not turn out the way we had hoped.  Adorable Ziggy is one of those cases.   The problem we are having is with Ziggy's jaw surgery.  He developed a terrible smell in his mouth, which went away with antibiotics but has since come back after the antibiotics were stopped.  Several reasons could be causing this, but our biggest concern is the plate used to hold his broken jaw together.

We had x-rays taken, and they did not show any area where the plate had shifted, or a screw had come out.  Ziggy was getting more uncomfortable each day, so we decided to let CVRC see what they could find.  Dr. Rachel Seibert saw Ziggy and discovered one of the screws had come through the skin in his mouth and had compromised the area.  Also, the screw was sticking into a delicate part of his tongue and preventing him from using it properly.  Instead, he had an excess of saliva always draining out of his mouth.

After an extensive conversation with his Surgeons, it was decided removing the plate was the only option.   The x-rays showed the bone had healed properly and appeared to be strong enough to hold without the plate.  Removing the plate is not what we intended, but we have no choice but to remove it now.

You would think it would be a simple procedure to remove a plate, but sadly it is not.  Ziggy will have to undergo another surgery to remove the plate and do cultures to address the infection.  Once the plate has been removed, Dr. Seibert will access the jaw to make sure it has healed properly and is stable. If the area shows any movement, she will determine the best way to stabilize the area. The best-case scenario is when the plate is removed, the jaw is stable, and all he will need is another round of antibiotics.

Friday is surgery day for adorable Ziggy.  In the meantime, we have to raise funds to cover his surgery and aftercare.  Please, Donate whatever you can so we can get our dear boy feeling better and able to eat without complications.  Warm hugs and much love from everyone at Noah's Arks Rescue.