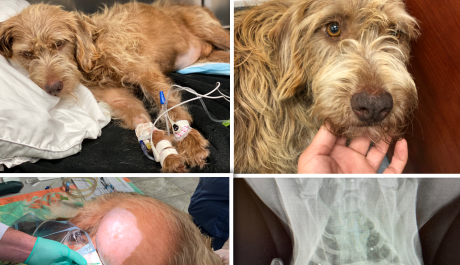 BEAUFORT, SC......I received a desperate plea with a video yesterday of a six-year-old wire-haired terrier mix abandoned.   Beaufort County Animal Control had been trying to catch this sweet pup for several days and had finally trapped him.  They knew he was in bad shape but was not prepared for how sick he was.  He did not have food or water and lived under a run-down mobile home with kittens that were also caught.

I saw the video and knew the dog they were now calling Ernie would not survive the night if he did not get immediate medical care.   I agreed to take Ernie and had him taken to CVRC in Charleston.   The minute he arrived,  my phone started ringing, and the texts were non-stop.

Sweet Ernie could barely breathe because of the fluid build-up in his abdomen.  X-rays showed that Ernie had rocks in his GI Tract, and an Echocardiogram showed he had heartworms in his right atrium.  Ernie has Caval Syndrome.  CS is a specific condition that develops when a mass of heartworms becomes situated in the right ventricle, right atrium, and often, the vena cava. These worms partially obstruct the inflow tract to the right ventricle, interfering with the tricuspid valve's closure and, consequently, resulting in fluid build-up and heart failure.  I have enclosed a link below that explains Caval Syndrome in great detail.

Poor Ernie was critical.   The first thing the ER Team had to do was remove fluid from his abdomen so he could breathe easier.  They removed three liters of fluid, which is impressive for such a small dog.  My consult with Ernie's Cardiologist, Dr. Sophy Jesty, had me very worried.  Ernie had to have the worms removed from his right atrium, or he would die.  The burden of heartworms was so significant that the chance of Ernie surviving the Catheter Lab procedure was only about 30%.

It was now or never for dear Ernie.   Even if the surgery was successful, we still had to deal with the rocks in his GI system and he is loaded with buckshot.  Every procedure Ernie needed was thousands of dollars with no guarantee.   I never want to put a price tag on an animal, so I never have estimates done.   Either I am going to help the dog, or I am not.  I decided a 30% survival rate was better than 100% Death.  If I did nothing, I had to put him down.

I started doing this post with no hope for adorable Ernie surviving.   Dr. Jesty worked into the night extracting heartworms.   She said it was the most delicate, complicated worm extraction she had ever performed.  When the basket was inserted into the artery to pull the worms out, they were clumped together.  The circumference around the mass was far greater than the opening of the artery.

With delicate precision, Dr. Jesty enlarged the opening and slowed down the entire process, so no worm was broken during the extraction.  She was able to remove the entire mass of 36 worms with one procedure.  That is the most she has ever removed at once.  I have a video on the site for anyone that has the stomach to look at it.  It is not for the faint of heart.

Ernie survived the night and is still critical but improving.   We now have to give him time to recover from the procedure.   The fact he survived is a testament to his Will to Live and Dr. Jesty's expert knowledge and skill as a Cardiologist.   I don't know of any other cardiologist who could have saved him or even tried once the worm burden became apparent.

We desperately need Donation.  Please, Donate toward this special pup that no one thought mattered except Beaufort County Animal Control and US.   Love and a heartworm pill each month would have prevented all this hardship.  Don't play with your Dog's Life.  If you live in the South, your dog will get heartworms if you do not take preventative measures. 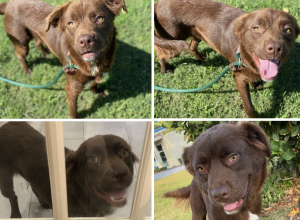