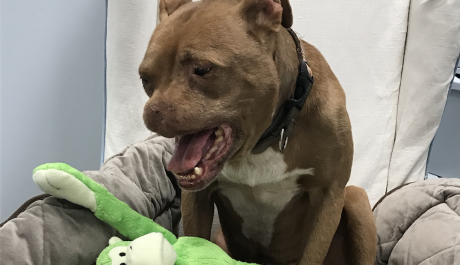 Your donation will help OTTO recover.

Look who is beginning to feel like his normal self again, dear Otto.   He was able to leave the hospital and go back to the NAR Rehab Center where he is as happy as can be.  He has to be on his antibiotics until his blood panel comes back that he is free of the Blood Parasites he has.   The Specialists said it usually takes about two months to completely rid his body of it and for his blood values to improve.

Once Otto has fully recovered, we will then decide if there is any benefit to him having more surgery to enlarge his nasal passage.  During that time, the Surgeons are talking to Specialists all over the World to see if a Shunt has been developed that is specific for the nasal area or if there is a different one that can be used for this purpose.   The problem we have seen with doing the procedure is the area that is cleaned out scars down, and the hole gets much smaller after the procedure.  What you initially drill is not what you end up with.   We already have first-hand experience with how much the area scars down and it is a lot.   Otto has had this procedure twice, and we will not repeat it unless there is new technology that will prevent that from happening.

All of the oxygen and breathing tests that were done while in the hospital told us he was setting plenty of oxygen.  The problem arises when he is sleeping and is breathing out of his nose only.  He sometimes panics before his body automatically shifts to breathing from his mouth which is where the bulk of his breathing is done.  The tests did show us that he was getting more air through that tiny hole than we had originally thought was possible.

In the meantime, he has to regain his strength and heal from the blood loss he had from the parasites.  We have posted a video of Otto running in the back yard which is something he has not done in a while.  He was excited to be out of the hospital and back with us.

Otto is an incredible boy that has endured a Lifetime of pain and suffering being forced to fight in Dog-Fighting Rings.   He has lived with us since January of 2013.  That will almost be four years since he was rescued from his Life of Hell.  We have learned a lot about this incredible dog and he has made unimaginable progress as far as other dogs are concerned.  One thing has never changed, and that is his love for people.  He loves unconditionally and is ready and willing to sleep at his person's feet all day long if you let him.   Otto is not reactive as he used to be with other animals and has learned to trust his handler to keep him safe.  He is not allowed to be in a room with another dog without being supervised because of his history.  He needs to be an only dog in a household.   Otto deserves a chance at having his Person, his Family, and his Special Home.   I can now finally say that he is ready for that.  We will always be his Family until one is found but Otto is an amazing dog, and we want to do everything possible to get him a Home.

If you want to know if your Family would be a great fit, please, drop me a note at [email protected]  We adore this sweet dog, and he is not getting any younger.  Otto should be around seven or eight years old now.    He needs to have his Person where he can be loved unconditionally for the remainder of his Life.  All he wants is a place to lay his head and watch the World go by.

Thanks for caring and making his Journey to Heal and find Love, possible.