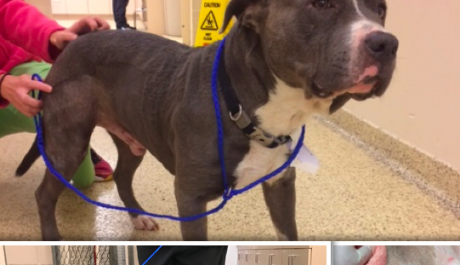 Your donation will help SPIKE recover.

LILLINGTON, NC.....Beautiful Spike was surrendered by his Owners, and then he was Returned to the Shelter by the Rescue that was supposed to save him and keep him safe.  The strikes against this amazing dog are beyond belief for me.   His Family allowed his tumors to get massive and then turned him into Animal Services in Lillington, NC saying he did not fit in.   He was then taken by a Rescue that returned him because he had too much medical going on.

I just shake my head when I hear the stories.  The sad truth is dear Spike was passed around, and NO ONE gave his condition a second thought.  One Volunteer with a Rescue we had helped before finally reached out and begged for help to save him.  I took one look and knew we were it for this beautiful dog.  We had him driven to Matthews, NC where he was evaluated by Surgery, Oncology, Cardiology and the Neurology Team at Carolina Veterinary Specialists.

During the initial evaluation, it was noted that sweet Spike was a little bit wobbly (ataxic).  They couldn't find any reason for it, and it was only brief.   It was determined by Spike's Oncologist that he had enlarged lymph nodes in the inguinal area that would also need to be removed.  Those would be sent off in addition to the mass to determine metastasis to other areas of the body.  Spike's Lungs and other organs did not know any tumors.   We were hopeful we get the bulk of the cancer and slow down the progression.

Spike did excellent during surgery and showed great progress after his procedure.  Unfortunately, our dear boy became very ataxic and Dr. Bergman decided he needed an MRI to determine if the cancer had spread to his brain and not to other organs.   The MRI was normal, so he ordered a Spinal Tap be done to see what was happening in his spinal fluid.  The spinal tap was also normal.

Everyone involved was beyond distressed over the situation.   Spike was doing amazing after surgery, but this new discovery was not giving us any clues.  Dr. Bergman decided we have to rule out rabies even though he was not showing any signs of having it.   We were shocked over this.  Spike was quarantined for ten days while Rabies was ruled out.

It was determined we had to do another MRI and Spinal Tap to see if his brain had changed during the last 10 days.  His brain showed significant inflammation this time as did his spinal tap.   Dr. Bergman has determined (as best as he can) that Spike has GME.  Granulomatous Meningoencephalitis (GME) is an inflammatory disease of the central nervous system.  It is believed a lot of dogs that were exposed to distemper at a young age can develop it.

Spike is on a heavy dose of prednisone and cytosar (cytosine arabinoside) which appears to be working.  He could not stand at all once he became ill and now, he can stand and walk for short distances with a harness.  We are hopeful he will continue to improve.   During all of this, Spike's biopsy came back that he has Mast Cell Carcinoma that had spread to his Lymph nodes.  We could not get all of the cancer but we did get the bulk of it along with the Lymph nodes.

Spike is a wonderful young 5-year-old Staffordshire Terrier that did not deserve all the hardship he has endured.  He has been nothing but sweet and loving during all of his procedures.   He is a young dog that should improve but will always have to be treated for his GME.  Spike is still in the Hospital and will not be released until Dr. Bergman feels he has improved enough to walk on his own.  He has a ton of bills that if not paid will prevent us from helping other animals.  Whether we like it or not, bills have to be paid, and we have a lot of animals at Carolina Vet. Specialists right now.  Please, DONATE toward Spike's Medical bills.